The Navies of Madasahatta in the World of 1891 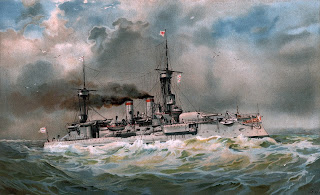 A striking picture of the German pre dreadnought S.M.S. Brandenburg launched in 1891 and commissioned in 1893.

I have recently been exchanging emails with Bob Cordery about many things including Jacklex figures and Madasahatta. The latter needs no introduction but it is worth pointing out that Bob had previously factored the island in to his huge imagi-world of 1891. If you have not seen this then you should check out the downloads section of his blog and be prepared to be impressed! Many of Bob’s colonial games have involved Zubia whilst my own have used both Fezia and Rusland On the odd occasion.

Madasahatta in 1891 was quite different from when Eric’s campaign picked up at the outbreak of WW1 and so whilst Bob is reworking Eric’s original map into his, what I call, ‘Barbarossa style‘ I thought I would have a play around with some back story for it. I have a couple of ideas for this but these have yet to be formalised or finalised. The one thing that I did get to thinking about though, was the naval dimension.

The Royal Navy and the High Seas Fleet were very different animals in 1891. The German fleet was young, small and hugely outnumbered by the British. If one were to use the historical make up of the respective fleets the Germans would be in for a short and exciting life. Clearly this would not be a lot of fun so a degree of compromise would be called for.

Compromise? Hang on, I thought this was supposed be an imagi-nation style set up? Did I miss the email?

The navies of the world in 1891 are certainly an interesting mix of the good, the bad and downright awful! Having said that the previous decades of experimentation in respect of naval design - together with the ‘influence’ of the ‘jeune ecole’ - were gradually starting to settle down into recognisable types. What I would look to do then, would be to tweak the fleets to capture some slightly later ships from what was built in the years leading up to around, say, 1900. This would give the fleets a little more to play around with. I would also ensure that the qualitative, quantitive and design differences were represented. For use on an imagi-nation style navy this will mean building ships that are ‘based upon’ rather than strictly accurate. I am expecting to have a lot of fun with side of it especially as the numbers involved will be modest.

As I see it there are three forces to think about - British, German and Turkish. My feeling is that the Turkish fleet will be quite antiquated with old ironclads and coastal defence style battleships with assorted frigates used for cruisers. Historically the Turks had some rather useful ironclads some 25 years earlier...The Germans would have a small presence but it would be of high quality. It would also be undergunned compared to the equivalent Royal Navy types. The British would be suing some good quality 2nd line stuff in conjunction with some modern units. Given the location of Madasahatta there is much potential for ‘Hunt the raider’ style operations as well using naval forces for support of land actions.

I already have some ideas in mind for some of the ships themselves - remember this would be a great opportunity for using second line vessels with the odd modern warship thrown in - but the initial shipbuilding efforts will be based in the ACW as I am keen to finish this project off first of all.

I’ve received a suggestion that we ought to consider adding the French to the pot. Some of the French warship designs of the period were downright weird ... and it would give us a reason to feature French Legionnaires, French Marines, etc.

That would be an excellent idea - and for the reasons you mentioned! On a separate note I often wondered why Eric never featured the French in the South East Asia naval campaign.

I think I am right in saying that the troops of the legion in Dahomey and Tonkin wore the tropical service helmet so raising the forces should be easy enough.

They seemed to wear light khaki, off white, or light blue uniforms, with matching helmet covers.

I forget to add the Light Infantry of Africa, which were the punishment regiments of the French Empire/Republic.

That is certainly something to think about and I will have a closer look. The warships alone make it very tempting!

This all sounds rather excellent fun and I like your thinking on the respective forces. Any chances of some Somali or Yemeni type pirates to spice up the action?

That could add some extra fun for sure. Certainly some raiding Dhows could feature.

I shall give that some thought and see how it could fit in.