Synchronicity and the ACW Afloat 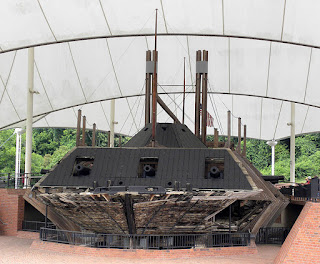 It never ceases to amaze me just how powerful synchronicity can be. A chance conversation leading to a couple of rule sets; an ebay acquisition rekindling interest in a particular period; an additional variant of the aforementioned rule sets sparking further interest and the need to satisfy the creative urge resulting from the inspiration provided by all of these things.

Memoir of Battle at Sea began as a chance conversation between Bob Cordery and myself whilst at the Skirmish show a while back. He has made much more progress with his interpretation of this idea than I have (mine is still very much at the testing stage) and has successfully taken the concept backwards in time to cover the 1860 to 1870 period. I was not initially caught up in this facet of the MoBaS naval rules but the recent acquisition of a copy of the ACW game Battle Cry by Avalon Hill had me scuttling to the ACW naval section of the library once again.

I would not describe myself as a particularly talented model maker but it is a part of the hobby I enjoy within the framework of my own limitations. I tend to be able to improvise and make use of existing objects and then turn these into something else. My scratch built dirigibles being a case in point – take one plastic kit aircraft bomb and stick various odds and ends to it and voila! Instant dirigible. Ironclads for the ACW should be very similar in theory – a monitor or even a casemate ironclad should be pretty straightforward to cobble together, certainly sufficient for use on the war games table. I have enough information and pictures etc to be able to do this and so I spent last night rummaging through the spares boxes to see what I could find to make use of in this construction project.

Bob Cordery is currently working on some models using his famous cartoon style approach and the ships are designed to be representational and not to look too far out of place with his 15mm collection (correct me if I am wrong here Bob!). My own models will be under no such restraint other than that they have to fit on a single Hexon terrain tile and will also need to fit on a card base 100mm by 50mm maximum. My models will also not be to any specific scale per se; rather they will be built to fit the hex which means in reality the maximum model size will be around 85 to 90mm long by around 40mm wide. The models will be loosely based on specific types and will be named after their closest historical counterparts. Using the Hexon terrain tiles makes life a lot easier in terms of movement and firing etc and of course, should I acquire the flocked green land set the possibility of some river based actions with forts etc becomes eminently achievable.

I have had a hankering to have a stab at this for some time and so all this recent activity has provided me with the inspiration to have a go. Looking at the longer term implications of this idea of course there is a VSF angle to be considered – assuming the basic building techniques work out for the models then there are many other possibilities for ironclad fleets. At the time of writing I envisage manufacturing around a dozen models a side and perhaps even a couple of forts for good measure. Ultimately I would like to tie this in with Battle Cry itself which of course raises the issue of what troops to use for the land stuff – clearly 15mm will be too large – and so I may look to see what I can do with some 2mm figures although this is a long way down the batting order!

I know I could just as easily buy the models from Navwar (they are the cheapest in 1/1200th) but that is not the point of the exercise. I want to make the models and derive the pleasure from doing so. My WW2 naval will need to wait a while – at least the model side will – but from a solo perspective I have more than enough ship counters to use so this is not critical. I may undertake a small 1/3000th project in the interim, just to keep my eye in. In all probability this will mean that the 1/3000th ‘mini-project’ will come to fruition sooner rather than later – details of which will come to pass in due course.
Posted by David Crook at 21:14