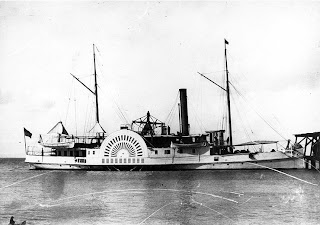 Due to continuing pressure of work my time for modelling (or for anything else come to that!) during the week is limited which explains the slow down of my ACW scratch building project. Last night was no exception but I was able to make a start on the refurbishment of my Confederate casemate ironclads and rams. I was able to very carefully remove the existing gun ports and pilot houses from the casemates and also the hulls from the rams and then to effect the necessary clean up. It was a fairly straightforward task with no great disasters resulting, except that the ram hulls were pretty much destroyed during the process but this was not unexpected.
The existing gun ports came off very tidily and are in fact reusable so rather than cutting a whole new batch out I can merely trim these by the required millimetre and reapply to the model. The pilot houses will be new but will not be difficult to make. That leaves the hulls - again, easy enough to do and the mock up I tried before calling it a night looked a whole lot better than the existing original so it fully justified my decision to undertake such an apparently drastic course of action. 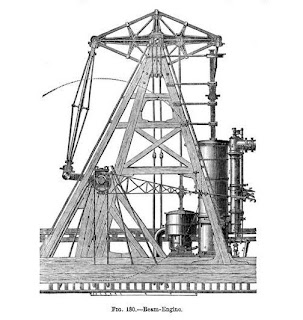 A great piece of news arrived via email for this project yesterday when Martin Goddard - owner of Peter Pig - responded to my enquiry about the availability of 'walking beams' (see the pictures for details - USS Delaware shows quite clearly the mechanism) as a spare part from his Hammerin' Iron ACW ship range. The answer was yes for which I was very pleased as these pieces of machinery are very fiddly to construct, so much so that I was not even going to make the attempt. Having these available means that a number of vessels I had originally discounted are now back in contention for building during the next phase of my project - after the first 24 models have been completed.
This means that my original overall target of 36 models is viable and as it is concentrated on the river the number of blue water ships (and the associated problems with masts, spars and sails!) will be minimal - at the moment anyway but who knows?
Posted by David Crook at 05:38