General Sir Charles Vere Cramp was not happy. A deputation from the Basmati elders had come to him with tales of increased Jalfrezi raids at the head of the Dhansak Pass resulting in much hardship and distress for the peaceful villagers. He was aware that the hill tribes were restless (to be honest probably no more than usual) but was keen to avoid being too confrontational with full scale troop deployments and such like. Nevertheless, action of one kind or another was needed as the only thing these recalcitrant tribesmen understood was the application of force. Her Majesty's government could not be seen to be idle in the face of provocation. He had decided therefore, that some selective destruction would be called for as a demonstration of Imperial displeasure and a warning of what might come to pass should these raids continue. The target he selected was the summer residence of Shere Khanaj himself, some half a days march from the fort at Dovecot. A small force of all arms would march to the old palace and the engineers would dynamite it. It would be noisy and sufficient to make the point intended. Naturally Colonel Bindon Oliver Goff V.C. had raised a number of concerns - mainly that the force was too small, the aims too limited and the target not important enough. The discussion was becoming rather heated until the timely intervention of Lady Cramp bringing her husband's medication with afternoon tea served to cool the atmosphere somewhat. The Brigadier prevailed and so the good Colonel was tasked with taking a battalion sized force with support for the half day march up to the palace where it was to be destroyed. With barely concealed anger he rode at all speed to Dovecot in order to ready his force.

Total strength of 27 - exhaustion level dependent upon the number of Jalfrezi units used (experimental house rule) up to a maximum of 10.

Ram Ditin was seething with anger at both his father, Shere Khanaj and his close advisor, Prophet Abul. Here was a golden opportunity to strike a telling blow on the thrice-cursed infidels as they brazenly marched into the Dhansak Valley. His spies amongst the Basmatis (to be accurate, spy) had told him of the plan to destroy the palace and of the composition of the force that was being sent to undertake the task. He had pleaded with his father on bended knees to allow him to raise the sacred banner and raise the tribes in revolt but to no avail. Instead they counselled caution as the Imperialists needed to flex a little muscle occasionally and it served no purpose in provoking them unnecessarily. Certainly the march should be opposed but only enough to make point and to save face. Ram Ditin sullenly agreed to his father's behest but privately decided to ignore him. He had sent out messengers to a number of local dignitaries 'inviting' them, in the name of Shere Khanaj to send men to teach the accursed infidel a lesson. He had stretched the truth a little in this but then he could not be certain as to how many would respond and so it was better to have too many than too few. He could justify this to his father if needs be but borrowing the two twelve pounders would be another thing altogether. He resolved to cross that bridge when he came to it. The force assembled was made up of the following.

Total strength 38 - exhaustion level 10. This was quite low as Ram Ditin did not want to lose too many loyal warriors on what was only supposed to be a demonstration.

Game Notes: The rules in use were Bob Cordery's Memoir of Battle but with an experimental house rule designed for ambushes in solo play. Basically, all the ambushing sides units are set up in their desired positions with a red counter on them. Assuming they are in cover then the enemy has to locate them before he can engage them. This is done by rolling the combat dice as though carrying out a normal attack up to the maximum range of firearm in use by the army. Only infantry and cavalry are able to do this (assume cavalry have a range of 3). Should the searching player score a hit then the ambushing unit has been spotted and the red counter removed - it is in effect now in play. This rule gives cavalry a proper reconnaissance role although infantry are only able to search when moving one hex. If they are moving two then they are going too fast to search properly. For each unit either located by searching or revealed by the ambushing player the searchers exhaustion level increases by the size of the unit located/revealed. The effect of this rule is to encourage the ambushing player to be frugal with his force because should he only use a single unit then he could hold up the entire army by inflicting hits equal to his size e.g. 4 for an infantry unit.

The table was 12 x 8 hexes and the Imperial forces were required to enter the table rather than be deployed. 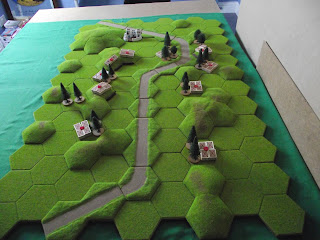 Into the valley of death - note the Jalfrezi units in their ambush positions with the red counters. The palace can be seen at the top of the picture. 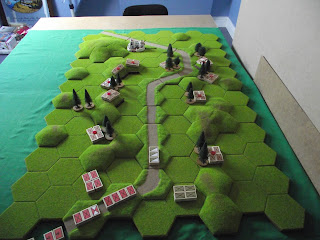 With C troop of the Malabar horse in the van the Imperial column enters the valley. Goff took the precaution of sending out two companies as reinforced picquets on either side of the line of advance - one company from the Sheppey Battalion and one from the Peshwaris. 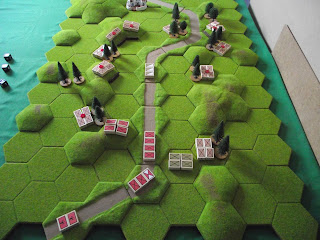 Contact! The Peshwaris stumble across a lurking warband of Jalfrezis but at a cost! Meanwhile the Sheppey Light Infantry are about to make a similar discovery. 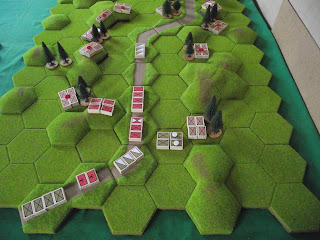 As the column moves further into the valley a crashing volley sounds from cover and the Peshwaris reel under the blow. 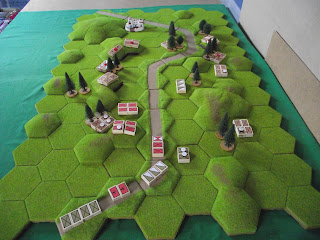 Several things happen at once as the two units on either side of the leading Imperial cavalry open fire at no effect but the gallant horsemen lower their lances, swing around and charge the right hand assailant, chasing them from their position with the fury of their charge! The Sheppey Light Infantry open fire on the previously hidden tribesman taking casualties in return. The Peshwaris, battered but unbowed fall back to regroup. 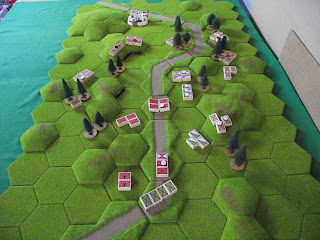 Meanwhile, the Medways enter the fray in support of the cavalry. The gallant horsemen, the target of artillery fire and a charge from  Ram Ditin and his bodyguard finally succumb to enemy action. The second troop of the Malabar Horse charge the tribesman threatening the right hand flank of the column - the same tribesmen that inflicted the coup de grace on the Peshwaris. Whilst the Sheppeys pursue the fleeing Jalfrezis. Critically for the Imperialists, casualties have been inflicted on the engineers. 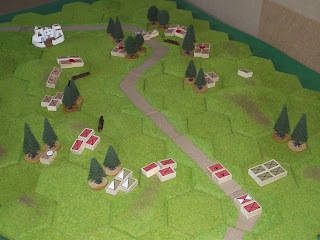 As both sides pause for breath Ram Ditin and his bodyguard fall back to their lines whilst the Imperialists regroup and reorganise. 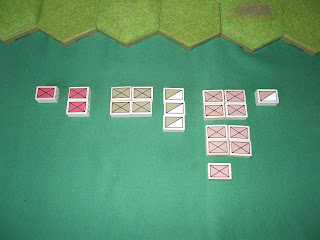 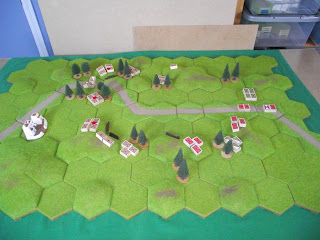 The final positions - note the unused Jalfrezi units and the sangars deployed as defences. 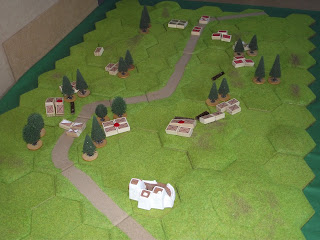 As the sounds of gunfire subsided to be replaced by the groans of the wounded and the jangle of assorted weaponry both of the commanders took stock of their position and of the outcome. For Bindon Goff any further advance into the valley was clearly out of the question with the numbers at his disposal. He was angry   at the loss of his men, angry that his advice had not been listened to in the first place and angry at how this apparent reverse would be viewed. He pondered this whilst the units formed up to retire back to Dovecot and decided that his report would depict this as a resolute defence against huge numbers of unexpected Jalfrezi tribesman.

Ram Ditin listened to the adulation from his fanatical warriors uneasily. He had outnumbered the Infidels but the trap had been discovered too early. His warriors were fanatical but short winded and so he resolved that the next time (and he was certain there would be another time) he and they would be better prepared. He raised his sword in salute to the cries of his men, his face an impassive mask.

It was short, sharp, chaotic and enormous fun and sets the scene nicely for the ongoing adventures in the Roghan Valley. The visibility/ambush rules need a little work but overall panned out OK so I will write them up for further use in due course.
Posted by David Crook at 21:09

A great little action that sets the scene for more battles to come!

I like the ambush rules. They work well and things could easily have been a disaster for either side.

I trust the regimental silverware and port were stowed safely away

Good report on a period I have yet to get into, yet as opposed to never

Many thanks for the kind comments. I was pleased at how the ambush/visibility rules merged with the exhaustion level but need to think them through with a little more clarity. Certainly a good first run out though and had it not been for the first warband being discovered then things could have been very serious for the Imperialists.

Brigadier Cramp and Shere Khanaj will need to do some thinking over the next moves methinks!

It worked out pretty well overall and has given me some thought for how better to represent the period going forward. I was pleased at the chaos the ambush caused, albeit too early for the Jalfrezis.

Cheers old chap! The blocks seem to look better with each game and the game was a hoot to do even solo. I would like to try the same against a live opponent at some point although I doubt the level of abject chaos that ensued could be replicated!

The board looks really good. Good report too!

It looked fine although a tad greener than I would have liked - I need to visit the Hexon people for some more NW Frontier looking terrain 'stuff'.

Glad you liked the report and I absolutely loved the GQ3 stuff.

It does look a little verdant, but there must be a green season there! Thanks for the comments on GQIII, hopefully there'll be more shortly.

Ian Drury was making lots of good noises about GQ3 so I suspect I will have to take a look in due course.

You are quite right about the green season although it does look a little too green!