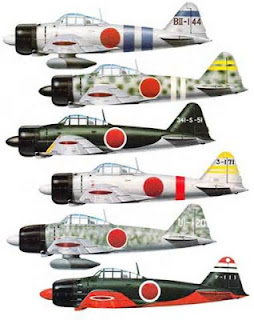 A variety of Zero paint schemes - gotta love the orange underside of the example at the bottom! Sadly these will NOT be appearing in a blog near you any time soon....;-)

It has been as busy as stink in my new job over the last few days but I have been enjoying what I am doing so that is the main thing! I have spent a little time on the hobby at odd moments and as a result have made a fairly big decision concerning my Axis and Allies Angels 20/Bandits High aerial collection.

I am going to drop the Pacific theatre.

The reason for this is very simple and comes down to the fact that I will need an awful lot of kit in order to do it properly. If I represented every type available thus far the collection would run into around 60 odd models and I simply cannot justify it - especially as the Middle East/Army Group South set up will finish up at around 40 odd models spread across four nations! In truth I only own a few models for the Pacific at the moment but the prospect of acquiring great wads of assorted Japanese and US aircraft was quite daunting (or should that be Dauntless?).

The models I need to get for the aforementioned Middle Eastern set are far fewer in number and I have sourced most of them in any event. Without exception repaints will be needed as most of the airframes will be in a desert style paint scheme.

I have a few replacement command packs on order for the ACW 15mm set up simply because all the Essex standard bearers have cast on flags which are far beyond my level of effort and concentration to paint despite being lovely figures.

I also have a model arriving that is the forerunner to something else I have in mind - I won't spoil the surprise but all will be revealed in due course.
Posted by David Crook at 20:34

That's one bugbear about Essex figures, the cast on flags. With most of the newer ranges they've got rid of them, praise the lord!!!

It is a sign of the times I suppose that my first reaction when I saw the figures was something along the lines of 'I didn't think ANYBODY made cast on flags any more!' Very frustrating as the figures are lovely. Still it could have been worse - a gaming buddy of mine was painting 15mm 7 years wars....with cast on flags....;-)