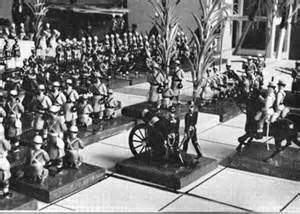 A scene from one of Joe Morschauser's games - and not a hex in sight!

As regular readers of this blog will no doubt be aware I am particularly fond of grid based wargames. One of the pioneers of this style of wargame, Joseph Morschauser, has featured very prominently on the blog of my old friend Bob Cordery, who has recently been working on both a 19th century and a modern (aka WW2) version of which he was kind enough to send me copies of. As both these periods are of interest to me I spent some time over the weekend actually reading them.  Bob's blog posts around Morschauser can be found here: Joseph Morschauser

Whilst reading the rules I had an idea.

The rules themselves use the concept of 'Battle Power' to assign a value to the types of troops in use. The idea I had was a very simple one but certainly has for me opened up a number of possibilities. Essentially then, why not use the Battle Power figure to closer reflect the troop quality/strength/training/equipment on a sliding scale? For example, a unit of guards infantry might be deemed to be better than the majority of the line troops in an army and so might be awarded an additional point of Battle Power; similarly a unit of raw conscripts might lose a point.

In order to consider this further I need to read Bob's posts in more detail as well as acquiring a copy of Joe's book which is available via John Curry's History of Wargames project.