Of the many desperate fights for control of the small Aegean island of Kalimtos the action at Aghios Margarita was by far the most vicious. A small British infantry force, supported by machine guns and mortars, was attacked from two directions by a vastly superior German battle group made up of elements of both paratroops and mountain infantry. The object of the German assault was the small village of Margarita with its dominating church. The village was unremarkable except that it was located along the main road to the coast and so would provide a convenient staging post for the German attackers.

The Rules and Scenario Details

This was a bit of an experiment in that I fought the action using Bob Cordery's Memoir of Modern Battle rules (MOMBAT) but on a square grid rather than using hexes. I had set this game up a couple of weeks ago for Bob's Morschauser based set but never got around to fighting it as planned and so I thought it would be shame to waste the set up!

Much of the game was in the nature of an experiment and so the salient points of note were: 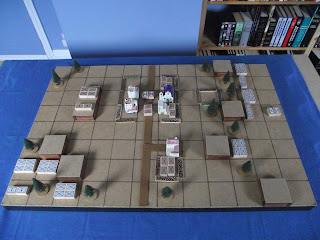 The opening dispositions. The British had occupied the town with the command, the mortars, a machine gun and an infantry unit whilst a single infantry unit deployed in the small walled enclosure to the south and the reaming troops, with a machine gun, took up a position on the hill to the west. The Germans were attacking from the east and the south west, their approach being shielded by the low hills and small copses of pine trees. 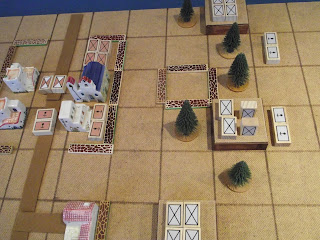 Turn 1 saw the Germans advance from the East and the central unit was promptly plastered with mortar fire. 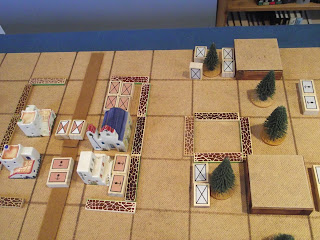 Turn 2 and the Germans continue their advance. The northernmost unit came under rifle fire from the town and suffered casualties as a result. 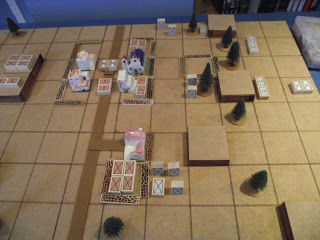 Turn 3 saw the German attack run into fierce resistance with the unit in the north pushed back with casualties, the unit in the centre was destroyed by machine gun fire and in the south a telling and accurate round of rifle fire virtually annihilated the luckless infantry assaulting the walled enclosure. 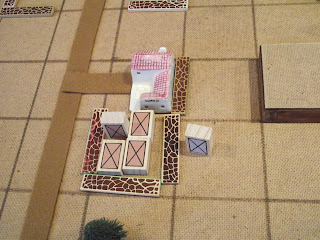 Turn 4 and the southernmost German unit meets in nemesis beneath the walls bristling with Lee Enfield rifles. The Germans fought hard and to the last as the British suffered their first casualties of the day. 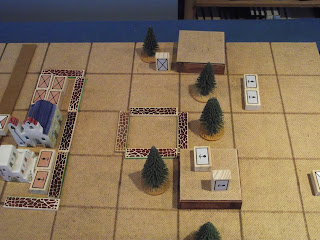 Turn 6 sees the German survivors in the north finished off at long range whilst the British mortars continue to plaster the hill and causing losses to their opposite numbers, trying gamely to salvage something from the situation. The German attack from the east has been roundly defeated - but what of the west? 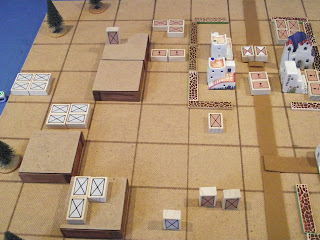 Turn 7 and the Germans in the south west make some telling progress as they attempt to outflank the hills and enter the town from the west. The British infantry in the walled enclosure leave the safety of their position in an attempt to support their comrades in the west - with disastrous results! 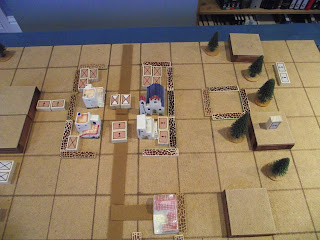 Turn 8 and the outlying British forces fall back to the town with the Germans in the west in ragged pursuit. 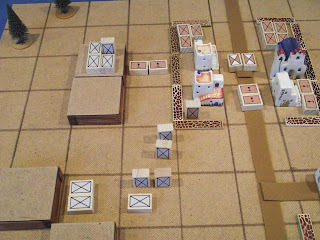 Turn 9 and the sting in the tail. Although the British have been battered and are being chased into the town they are still able to inflict telling casualties on their pursuers. 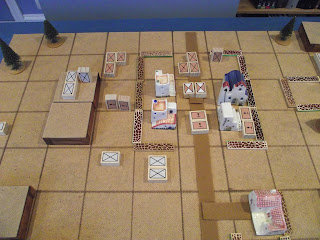 Turn 10 and the remnants of the German assault force hastily reorganise themselves prior to rushing the town. Their casualties have been horrendous so this last assault is critically important. 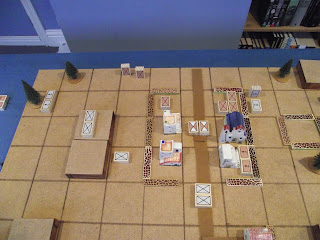 Turn 11 and the Germans have almost cleared the way into the town. One of the British machine guns and the mortars have at last been silenced and victory is in sight! 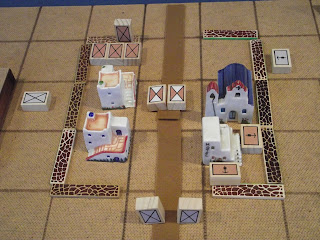 Turn 12 and a knockout blow! The sole remaining British machine gun opens fire at point blank range and scythes down the attacking Germans at the entrance to the town. This is the final straw as it was the sixth and final German unit destroyed and so the British had held on.

The action worked surprisingly well and considering that a number of the mechanisms I was using were very much by way of experiments this was perhaps surprising. I was particularly pleased with the 'one diagonal' rule which made the effect of the square grid far less noticeable. The battle back rule worked very well and this I will certainly keep for future use. The only thing that I am leaning towards is the Command and Colours Napoleonic idea of using the number of blocks/bases/figures in a unit as being the determining factor in respect of the number of dice rolled. That will be something to ponder going forward though.

At a personal level this was the first game I have fought for a while and very enjoyable it was as well. It more than made up for the disappointment of a couple of parcels recently delivered that are both wrong for a variety of reasons and have needed to be sent back/reordered.

I have also made a promise to myself that I will play another 10 games before the end of the year so that I would have completed 52 in two years or one a fortnight.

Hi David,
Splendid scenario and battle report. The rule tweaks seem to have worked well. The one-diagonal per move is a good one.
I do miss the purple prose, though.
Regards,
John

It was almost like two fights in one as first one side was fought to a standstill and then the other. The Germans were very unlucky with their dice rolls - the British however were a different story altogether! The mortar unit was particularly effective. In the end the Germans were unlucky to lose but they had suffered horrendous casualties and eventually ran out of troops.

The diagonal I was very pleased with as it opened up the board considerably and as it was limited meant that the level of distortion was minimised.

I will work on some purple prose in due course - time is very much against me at the moment though!

It is good to see that you finally managed to fight a wargame!

I am pleased to see that the rules worked well on a squared grid, and that the optional diagonal rule was a success.

I look forward to seeing more battle reports as and when you can fit them in ... which I hope will be soon!

It was good to get a game in again - especially as this one has been sitting around for what seems like an age! The diagonal rule was an improvisation but it seemed to make a lot of difference and really opened out the grid.

I have some ideas for a few other actions and hope to turn them into something tangible soon.