Putting the Hero in Heroscape

You may recall my earlier posts on the subject of Heroscape - the fantasy miniatures board game formerly produced by Hasbro. Many war games players have acquired this game primarily for the hexed terrain tiles that came with it and there are many blogs that feature games taking place on this terrain - with your truly also having done so. I now own the tiles from three copies of the first starter set as well as whole pile of flocked and painted tiles courtesy of Bob Cordery. From a land perspective I have more than enough for my needs and if I am honest the only disadvantage of using these is their size as the hexes are only some 45 mm across the flats - less than half the size of the Hexon version. In the game as played a single model occupies a hex (in some cases two hexes for the larger types) and this is fine. In fact if you check out Google and look at the images under Heroscape you can see some quite superb set ups. For my own use though these tiles will be used for games involving small scale models - I am thinking about the 3mm troop blocks from Peter Pig or those from Tumbling Dice - and will be suitably painted in due course. 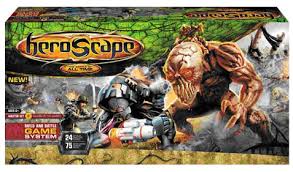 What of the figures though?

The figures thet come with the game are, in my opinion, not bad. They are prepainted and fairly basic in terms of detail BUT are very usable en masse. I had mentioned previously about using some of them as the basis for games of either HOTTs, the forthcoming Dragon Rampant or any other skirmish level fantasy/sci-fi rules that came to hand. I also have a downloaded set of Command and Colours Fantasy rules produced by a chap from Belgium called Te Wapen - needless to say given my fondness for this system this is very much in the forefront of my planning.

I had even mentioned about repainting the figures as they are very basic in that regard. The ideas I am considering will certainly need some painting in due course and whilst I have no objection to basic painted figures - flat colours and no shading/highlighting - I do get very upset at sloppy painting though - you know the kind of thing, where the paint has gone over the edges and has slopped onto something it should not have. Heroscape figures are ideal for the gamer that is either unable or unwilling to opt for something more aesthetically pleasing - and up to a point I am guilty on both counts.

I now have a very large collection of the figures from the original starter set and also from the second version courtesy of Jim Duncan and I cannot begin to tell you how pleased and inspired I am to be in this position!

Jim came to my rescue in the biggest possible way. Like many gamers he has a lot of Heroscape terrain and has also purchased sets specifically for that reason. It has also meant that he has a huge selection of the figures being unused and unloved. Several emails and a phone call later the entire box full figures, rules, markers, dice and even some terrain was winging its way to Chez Crook. The plan is that I will cherry pick the pieces I want and then put what is excess up for sale to raise funds for th charity that Jim is supporting - so everyone wins. I get some figures that have given me a major boost in the inspiration department, Jim gets a whole lot of extra room in his den and the charity will hopefully benefit from the sale of some of the rarer items.

Some of the Marro figures. I will probably leave these as they are but I will do something with the bases.

To say that I am pleased with this little lot is an understatement and I am truly overwhelmed by the generosity of Jim in passing this lot on. To give you an example (and I will be posting lots of pictures over the next week or so to give you an idea of the scale of the windfall) I now have some 80 Marro figures. The Marro in Heroscape are a race of aliens similar to the GW Tyranids in concept. The plan is to use them against the US Paratroopers supported by the robot types - the paratroopers will need repainting into something a little more near future/sci-fi ish - for some Aliens type games. The Vikings and the Samurai may turn into some HOTTs or Dragon Rampant armies and there is even some figures that would be usable for Frostgard.

The Heroscape Vikings - complete with horned and winged helmets and therefore eminently suitable for some heroic fantasy action. I will need to do something about the spears though!

I was also delighted to get a great pile of the blue tiles as well so I now have some 250 plus of these so the seascape for the Salamis project will have a playing area in conjunction with the land tiles and the 1/1200th scale models I have been stockpiling.

So all in all my mojo has been given a fairly substantial kick up the derriere with this little lot and I cannot thank Jim enough for this - even more so given that he is still recovering from surgery and various assorted health issues. I titled this post specifically with him in mind....;-)

In all fairness it's a Win/Win/Win situation all round.

David gets a boost to his collection.
Jim gets space in his wargaming hut to work on other projects.
The charity fund gets a boost if some buyers can be sourced.

I'm quite happy with all of that.

You seem to have managed to build up quite a collection of Heroscape figures and terrain ... and if you need any more oft He latter, please let me know.

I like the map of Africa ... and I can see possible uses for similar maps.

Credit where credit is due and if I am honest this would not have been possible without your generosity. It has given me the boost I needed and I hope to be tackling some games (and painting) soon.

I reckon I am set fair as far as the tiles are concerned but you never know!