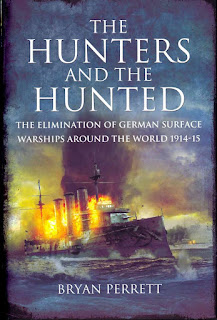 Of course I couldn't possibly comment....
Posted by David Crook at 19:33

Your remarks reminds me of a WW1 naval campaign I took part in in Wellington nearly 30 years ago. I was given command of the 2nd Destroyer (Torpedo Boat?) Flotilla of the German High Seas Fleet. Several brisk actions in support of the Battle Squadrons earned the 2nd Flotilla the sobriquet 'Death's Head' Flotilla. Though a trifle outclassed by their British equivalents - only the flotilla leader was a real match, the DHF were putting down at least double the numbers we were taking.

Then came the magnificent action that was to be the DHF's finest hour ... and its last. During the course of a wild sea-going melee, the Flotilla leader got close enough to shove in a number of torpedoes into Admiral Jellicoe's flagship, which promptly went down and took the Admiral with her. But the 15-inch shells of the HMS Benbow were already on their way. Thus ended the glorious but brief career of See-Kapitan Blank of the 2nd 'Totenkopf' Flotilla.

The destruction of the raider SMS Eden (last of the German Asiatic Squadron) by the cruiser HMAS SYDNEY in the Indian Ocean was the first naval victory of the Royal Australian Navy after its inception in 1911.