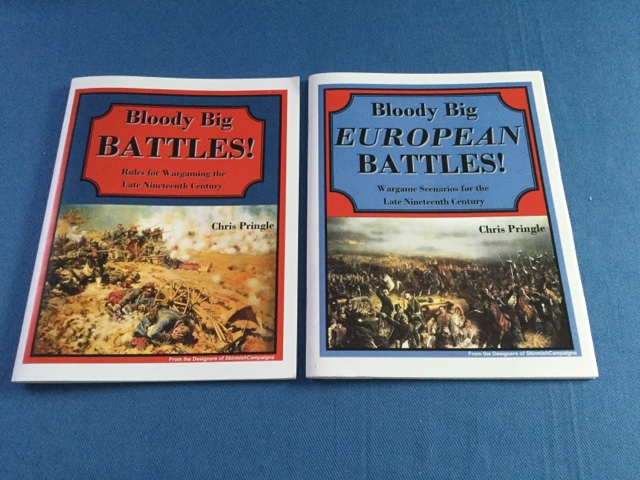 Oooohh, shiny! Something to appeal to the commander in chief in every war gamer methinks!
Following on from a conversation with my old friend Chris Hardman I decided to take the plunge and acquire a copy of Bloody Big Battles by Chris Pringle. I also ordered a copy of the scenario book for good measure. the rules are also well supported by a Yahoo group and a couple of blogs as well - Bloody Big Battles is the one that springs to mind. This rules are designed with the larger size of action in mind so should appeal to most of the megalomaniacs I know!
The rules features nine of the larger actions of the Franco Prussian War whilst the scenario book includes the Crimean War, "Austrian Decline 1859 to 1866, the Russo Turkish War as well as the Serbo Bulgarian War of 1885 and the Greco Turkish War of 1897. No surprises for guessing which of those have caught my eye....
The rules work on a scale of 1,000 men or 24 guns per square base upon which you can place as many or as few models as you like. Given the scale of the actions typically represented my first thought was to drag out the block armies and use maps drawn on paper - this would be a very cheap way to tackle it. Or I could use the blocks with 3D terrain - something that Doctor Phalanx on his blog has done - and very nice it looks to.
The rules could (and indeed have) be used up to around 1914 and I have seen a couple of battles from the Balkan War refought using them.
I have always felt that there is something rather special using a map to fight a battle with - I suppose it is the nearest one would get to being an actual commander in the field - which is probably why I enjoy board games so much.
This set has a huge amount of potential for me especially when taken in conjunction with an idea I am currently flirting with. More of this to follow once I have digested the contents.
Posted by David Crook at 15:08

There are some very interesting things coming out of this lot. I'll be curious to hear what you make of 'em DC.

I look forward to more of BBB with great interest!

I must confess that these rules appear to be scratching an itch that I was not even aware I had. I suppose the 'lightbulb moment' was the realisation that here is a toolkit to make use of my block armies with.

Blocks and maps - it has a whimsical charm all of its own!

From Skirmish Campaigns there are a lot of good things available and you can rest assured I will be exploring them further.

I am hoping to use these rules for a number of ideas - all of which will feature on the blog in due course so watch this space!

I too will watch with interest - with a view to the Crimea and Franco-Prussian War
And maybe the odd imagination conflict :-)