50 Years Young (and Lawford of course) 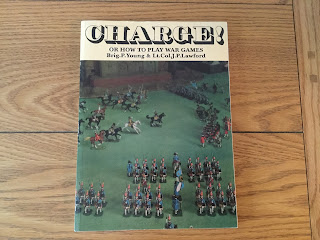 One of the most inspirational books in my library - this is the paperback version (not the soft back white cover edition) but it does have the coloured covers.


It is hard to believe but Charge! Or How To Play War Games by Brig. P. Young and Lt.Col. J.P. Lawford is fifty years old this year. That's right, fifty years old!

The influence this book has had on the Wargaming fraternity is profound and indeed, I am sure that for many gamers of a certain vintage it was instrumental in them immersing themselves in our hobby. I know from my own perspective that back in the early 1970's this book was part of my 'holy trinity' of titles that were almost on permanent loan from our local library - the other being Grant's Battle - Practical Wargaming and Terry Wise's Introduction to Battle Gaming (Featherstone was a later influence for me by a couple of years or so).

I have enjoyed many Charge! based games over the years and I am sure that the whole 18th century 'imagi-nation' trend owes this book a huge debt.

The book has everything - a potted history of the war game, basic and advanced rules with examples of play and a couple of highly enjoyable scenarios. The book finishes up with a brief guide to collecting and painting model soldiers and a list of suppliers.

It was and is a fantastic book and the wargaming fraternity owes the two worthies a huge debt for introducing us to 'a magnificent indoor sport'.

You know, I have never seen this book - never mind read it!
A deficiency I clearly need to rectify :-)

Must admit I only came to this book about twenty years ago (been gaming for 40+ years) my early influence was Featherstone , but a classic book , Tony

I bought my hardback copy from SWAN LIBRARIES - a bookshop in Upminster, Essex - soon after it was published. It was the first wargames book I ever bought ... and it still occupies a place of honour on my bookshelves.

Huzzah, 50 not out and going strong to make a century!

A fine book and I have a copy in my collection.

Well put, but oh dear, 50 years ago - time just drifts along without one really noticing it passing.

'Charge!' was the very first war games book I ever owned, bought in 1975, the hardback edition. Unfortunately the dust jacket disintegrated for good 15 or 20 years ago. Still one of my favorites.

Yes! A touchstone of mine although I never read it until 1994. It is the main reason I found my way back into the hobby after foundering for several years at the close of the 20th century. Hard to believe the title is now half a century old.

Somehow I managed to acquire two copies at my local second-hand book store. (Probably should have used that luck on lottery tickets.)

despite having been in the hobby for the better part of 45 years (over in fact) I have never played a game using the "Charge!" rules... my foundations were with Featherstone - I think to my juvenile mind there was always something "not quite right" about the background and made up history in "Charge!"??? either way - no argument whatsoever - it's a bed rock of a book in terms of the hobby today

This was the first wargames book I ever owned and I still pick it up on a regular basis and leaf through it. I haven't played the rules for decades but the style of game and the language is simply magnificent.

Are the 'Charge!' rules available for download somewhere? If we all have to rely on pricey vintage copies there can't be many people today with access to the rules. ...Glenn

If you look in the Old School Wargames Yahoo group in the files section there may be something. There is also a paperback version available from Ken Trotman Books.