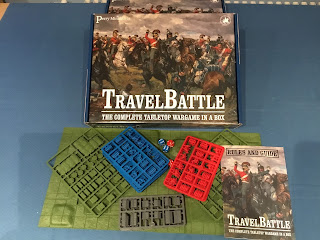 I'm still waiting for my second game to arrive. Once it has I hope to start playing around with different configurations for the boards.

I think that your comments about troop types is well made, although I would prefer to see some ACW figures added to what is available.

I look forward to seeing your first battle report.

I should have added that an ACW set would be very nice to see as well as what I would like for the Napoleonic set. One could also make a case for a generic 18th century set as well.

I can certainly see myself adding another couple of sets in due course and the prospect of using 6 boards on a 3 x 2 basis is very tempting indeed!

How many more of us I wonder have ordered in multiples? Good to know one is not alone!

You are not alone (that sounds like the punchline from a terrible advert, but you know what I mean!).

I broke down and bought a copy. I had read or heard somewhere that the 50.00 price was an introductory price and it was going to be bumped up to 60 or 65. When I saw Caliver Books were selling it at 45.00 that was the final straw. Like Bob, I do hope they come out with an ACW set, although at present I have 5 different scale ACW figures and really don't need a sixth. I also like your idea of an 18th century set. At least I have time to think of some other ideas of how to use this game while I wait for it to cross the pond.

I am playing around with MS Paint in the hope that I can draw copies of the two TRAVEL BATTLE boards do that I can put maps together for battle reports. With luck the images will be completed later today, and when they are I will publish them on my blog to show potential purchasers how the boards can be used. (I also think that people that already own the game will find them useful.)

I'm really, really, not getting the reasoning behind why everyone is getting so excited about this... :o) Cheap plastic board, cheap plastic soldiers, a four page rule book and a nice box... sum total of manufacturing costs about a fiver from downtown Shengzou.... and then every review I've read has said something like, I'm going to use different rules, and I need to buy more than one in order to get the randomness of terrain, and I'm going to use someone else's figures.. and I'm thinking why are they spending fify quid on this when they can do it themselves for fraction?????

There is an interesting background article about the game, and its origins, in the latest (No 355 May)issue of Wargames Illustrated.

I usually find with most miniatures games these days that one box is never enough!

Steve-the-Wargamer, you took the words out of my mouth!
I'm spending my money on Pendraken 10mm figures for my Portable Wargame armies, and having them painted by a professional who'll do a far better job than I ever could, and more quickly too.