"March or Die" or yet another remake of Beau Geste.... 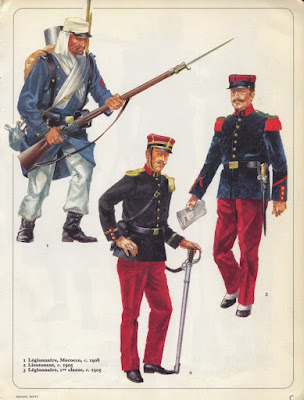 
I offer no apologies for what you are about to read and I suspect that most people that know me well will not be in the least bit surprised. Following on from a very enjoyable and inspirational Funny Little Wars game - the famous Leipzig on the Lawn - I have had occasion to think long and hard about my gaming (or rather lack of) and how I am going to tackle it. I have settled on the rule systems I shall be using - primarily a Portable Wargame/Command and Colours/Morshauser based hybrid of sorts - and also the scale for what will be larger actions - namely 1/600th or 3mm. Now lets be honest, as a scale 1/600th is hugely practical but for me is very much an extension of my block armies as the size makes for very easy painting and works well with Heroscape tiles. In effect I shall be using these models instead of the blocks for the look of the thing - as is only right and proper.


That is all well and good and eminently sensible but hardly a visual treat. Other scales, which in this context means for me 15mm through to 28mm, I seem to have real problems with - usually because of the number of figures I would need to make it look right. I like units to look like units which means in the earlier periods tends to mean using a lot of figures - which in turn means more painting etc, etc, etc...It is very much a personal conundrum. I read somewhere that a lot of the games you see in the magazines these days (I cannot claim to know for sure as I no longer buy any) tend to use a small number of figures - almost skirmish level in fact.


I have said in the past that I am happy using a gridded playing area and so using the above rule systems or variants thereof is quite a natural thing and I am well satisfied. However, using figures is the ultimate aim and so using models that will give the visual appeal I want with the limited numbers I want to paint means that a smaller number of larger figures is in order.


I suspect you can see where this may be heading.


Using a 6ft by 4ft playing area with 6" squares will comfortably accommodate larger scale figures on the 4 infantry, 3 cavalry or two gunners and gun basis. By larger figures in this case I mean of course 54mm.


So here is how it goes. Inspired by the aforementioned Funny Little Wars Leipzig battle - especially the use of 54mm plastic figures painted in an old school fashion - I started to think about using such figures on a 6ft by 4ft table. Initially my thoughts headed to the North West Frontier circa 1890 and the range of figures produced by Armies in Plastic. You may recall the Roghan Valley (there is a folder with the posts associated with it) so revisiting seemed like a good idea. After all, there would be plenty of colour and flavour. I even have a modest library covering the period from 1878 to 1935 so there was little excuse not to think seriously about it.


However, I was thrown a fairly substantial curve ball in the shape of rather a lot of plastic 54mm French Foreign Legion and Berber Tribesmen - not to mention a fort - for a very attractive price and so I took advantage of the same and am now the proud owner of some 200 plastic 54mm figures from Armies in Plastic plus their rather splendid Fort.


After some experimentation on my 6ft by 4ft table one is easily able to deploy two reasonable looking forces without the table looking too cramped. On a non grid based basis and assuming a 12 figures infantry unit deployed in two ranks (covering an area of, for example, 18cm by8cm) one can happily use around half a dozen or more units at side - which is not only suitable for the Portable Wargame but also things like The Men Who Would be King. There is s a lot of potential for sure.


As it stands then the plan is to raise a couple of Portable Wargame sized forces circa. 1900 for both the Legion and their erstwhile opponents, the Tuareg or Berber tribesmen. Although the latter are described as Arabs they are dressed in North African garb rather than Arabian but would also be suitable for use as Sanussi tribesmen for the Great War or even for use against the 1930s Italians. The Legion infantry can be supported by the use of the Colonial pith helmet wearing British with a suitable paint job - which would also apply to the artillery and gatling gun available from the same source. In fact the only real shortage are camels and mules but I plan to source some of these as dismounted markers of some kind.


It will also come as no surprise to learn that I have even thought beyond the immediate use of the figures and what else can be added to the collection. I have even considered inventing a large island off the coast of North Africa inhabited by Berber tribesman but with British and French enclaves at either end. Add in the Turks as supporters of the Berbers (as they did historically during the Sanussi revolt of 1915) and possibly Germans supporting the Turks and you have the makings of something rather special. Dare I say it? Almost Madasahatta like....


Certainly something else to think about in any event....particularly as it would open up the naval dimension which is ordinarily not what one thinks off when discussing the Foreign Legion.

Sounds interesting! You could also add in 1898 Americans and recreate the setting from "The Wind and the Lion" where Americans are drawn into interventions along the Barbary Coast.

I had not thought of that and worse of all have not seen the film! I shall have to rectify this and I note that Armies in Plastic also produce Americans for the Boxer Rebellion and Span-Am war.

Even more to think about!

Sounds promising. AIP does have pack camel sets as well as screw guns on a camel sets. (if you can find one.)
pack camel picture

I shall look out for them. I understand that AIP have gotten/are getting their moulds back from China which is what has disrupted their supply somewhat. Their range will be produced in the USA.

I will certainly keep an eye out for the screw gun!