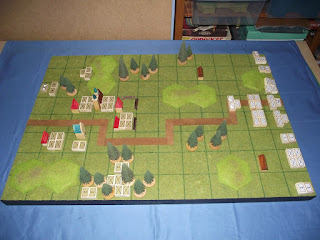 A WW2 game fought using an early version of the rules that would eventually appear as the Portable Wargame. Germans attacking US troops during 1944.

Part of my block army collection includes units for fighting actions set during WW2. In the games folder there is a number of games I fought ranging from the pine forests of the Eastern Front via France and Belgium during 1944 and the Greek Islands in 1943. They were all good fun to fight and I used a combination of both a hexagonal and a square grid.

The only hexagonal playing surfaces I now own are the laminated and geomorphic maps that originally came with the Axis and Allies WW2 collectable miniatures game and these have seen much service with the block armies. Unfortunately, as far as I know, they never produced a desert map  which is a shame. There is of course the old standby of the Memoir '44 map boards but these are a little on the small side for the blocks - as are the Heroscape tiles I still have unless I use a single block units.

Bob Cordery has, through the medium of his Portable Wargame series of books, outlined the advantages and disadvantages of squared, hexed and offset squared grids which was very useful. For my own part I am leaning more and more towards using a square grid for those games where I need to use one. The biggest hurdle in using a square grid has always been the old chestnut of allowing for diagonal movement and firing. There are ways to allay this and I have previously mentioned the system adopted in the Napoleonic naval rules 'Ship 'O the Line' originally published in the early 1970s (and the forerunner of the excellent Avalon Hill board game Wooden Ships and Iron Men - ironically using a hex grid rather than the square version of the original rules) which adjusts diagonal distances to match as closely as possible to the orthogonal versions.

Within the Portable Wargame I simply allow a unit to make a single diagonal move during its movement as the rates are quite low so the distortion is minimal. This has the effect of really opening up the board especially if you also extend the same to direct fire. Essentially you can work with 8 possible directions of movement or firing rather than the 6 of a hex. I would also argue that it is easier making terrain to fit in a square rather than a hex!

Using a square for naval games has the advantage of being able to reference natural compass headings and again, with 8 directions available rather than 6. As movement is an important consideration for naval gamers again you can see the practical advantage of using squares.

Taking the above into consideration I have decided that my games will primarily be fought on a square grid. Using the diagonal option from the naval rules mentioned as a guide means that a square grid is far more open and, dare I say it, natural in respect of facings etc. 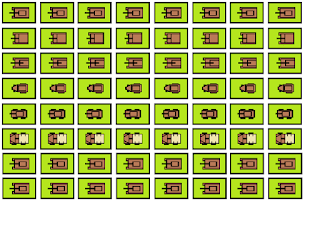 The original 'brown' vehicle labels I designed using MS Paint. The set includes tanks, self propelled artillery (open topped) and anti tank vehicles, armoured cars, half tracks and trucks. I produced these in three colours with light grey and olive green joining the brown types above. I also toyed with the idea of producing a set with a sand coloured background for use in the desert but never got around to it.


When I decided to include WW2 in the great block project I was really torn as to how best to represent vehicles. Tanks, SP Guns, Armoured Cars, Trucks, Half Tracks and all the permutations associated with them really gave me some problems as I was unsure whether to draw representational types or to go down the military map symbol route. After much thought I decided to go down the military symbol route and opted to use combinations of blocks to represent specific types. For example, an armoured infantry unit would consist of three infantry blocks and an armour block. You can see what I mean looking at the game above.

Good commentary on squares. I recently made a 15 X 15 Joseph Morschauser inspired square board. But, David I keep waiting to see your battle report on using blocks with The Napoleonic Portable Wargame "Big Battle". Seems a good fit 8-)

Peter Pig's PBI rules used a grid which worked well, but personally I thought a higher level game would have worked better. So each stand would become a Platoon or Company rather than a squad.

A far more detailed overview of grid types can be found Bob Cordery's Portable Wargame books and I am pretty sure he has a blog post or two on the subject. Ship 'O the Line handled diagonal movement and firing very nicely and my plan is to use elements from that for my own spin on the rules.

I have the material to make a larger board but I need to look at a 4" square which means that a playing area of 18 x 12 (6ft by 4ft) will be about as large as I can go.

Funnily enough I am planning a game so watch this space....

I did not have a specific scale in mind during the game depicted in the same way that Memoir'44 is elastic in what the units actually represent. For my own purposes the lowest level I envisage going to using a single block to represent a platoon.

I have not used the Peter Pig set although I have seen them in action. Sam Mustafa's Rommel is designed for a higher level game and having seen them one could easily use blocks.