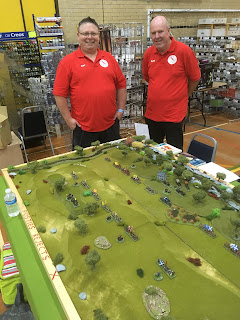 One lover Ray and Dave from the legendary Postie's Rejects with their quite superb Battle of Killiecrankie 1689 game in 15mm. Ray produced the figures (by Essex) for both sides and they looked quite superb.

Rather a large Sitrep this week for a couple of reasons. To begin with there is a lot to tell and also because I am going to away for a couple of weeks as SWMBO and I are heading to Cuba.

Yesterday, the 9th of June, saw yours truly in attendance at Broadside in Sittingbourne in Kent. Regular readers of the blog will no doubt recall my usual modus operandi at the shows I attend - I tend to arrive early to help Dave Lanchester set up his secondhand book stall (he usually takes money off me as well - and yesterday was no exception!) and am usually heading for home early afternoon. Yesterday was a little different in that I had a lot of 'business' to attend to so my visit ended around 11:30. For business read 'selling and passing on bits and pieces and collecting a couple of pre-orders'.

This was speedily concluded and so I was able to chat to a few people - gamers, traders and bloggers - and also to conduct a brisk tour of the trade stands. 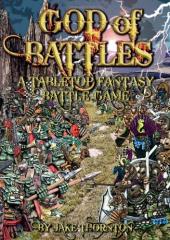 Courtesy of the Foundry stand - one of two sets of rules I purchsed from them for £5 a volume with the other being.... 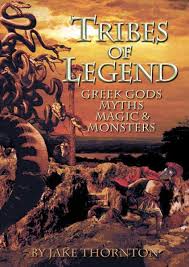 ....specifically devoted to the Greek Myths. 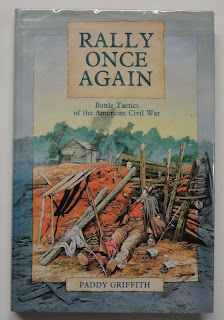 I have been after this edition of Paddy Griffith's book for an age and that very nice Mr Lanchester duly obliged with a copy. 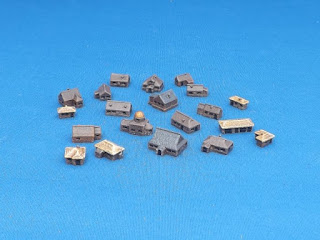 A 1:1200th scale Russian Village produced by Brigade Models and the redoubtable Tony Francis (who also prints my flags for me!).

The two rules sets were acquired for some ideas I have had kicking around and I suspect that of the two it is the only the Greek version that will be used at intended. For £5 each though it hardly caused the wallet to wince! The Griffith title has come at a very opportune time in respect of my ACW project so is a very welcome addition indeed. The Russian village has been earmarked for something Rommel/Memoir 44/Portable Wargame related.

As far as the games on show were concerned I can only apologise for not taking more pictures that the one of Killiecrankie - that was before the show opened - but I simply did not have the time. The show got very crowded quite early on which would have made it tricky (at least for me with a phone). I was disappointed not to get any shots of Messrs. Fox and Harbron of SEEMS running a Zulu Wars 'The Men Who Would Be Kings' game with everything being provided by the aforementioned Mr. Fox. The game was being set up when I embarked on my travels and when I returned the first Zulu Impi had taken a devastating volley judging by the number of empty spaces on the unit base!

As is usually the way at wargames shows I was lucky enough to be able to meet with and speak to a number of the 'Blogeratti' with a special mention to both Bob Cordery And Ray Rousell for the lengthy chats we had and also to Big Lee and Tamsin. Lee was telling me all about his plans for his 6mm armies and so i shall be following these with great interest.

It was a flying visit to be sure but I am very pleased I went. the show seemed to have a lot more visitors than previously although I have not been for the last three or four years due to usually being on holiday. It is hoped that the success of the day will encourage the organisers to repeat the show in future years.
Posted by David Crook at 09:26

What a luvvly shade if red!

A question: you say that you have been after Paddy Griffith's "Rally Once Again" for an age. Is there something special about this original(?) edition which is missing from the Revised edition ("Battle Tactics of the American Civil War") or are you just a completist?

I ask as I'm wondering if there is anything important I'm missing in owning the 1996 new edition.

Looks like a great day out and a fun hobby adventure
Enjoy your trip to Cuba - sample a few of the local rums for me :-)