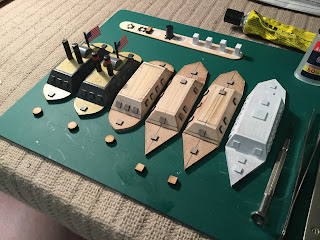 That is the hard bit finished - now preparation for the painting.

To be strictly accurate in this particular case my card has already been marked - simply because Warbases have done so! Aside from bespoke MDF pieces they also have a very useful sideline in cutting 1mm thick grey cardboard - the type of thing that is usually backing a notebook or writing pad. The sizes I have found incredibly useful - not to mention saving a huge amount of time - are the 5mm square, 10mm x 5mm, 10mm sure and 20mm by 10mm. All of these have featured in the models built thus far, usually as gun port covered or hatches.

C.S.S. Atlanta - note the spar torpedo assembly in the side profile picture

Yesterday evening, after another busy day with work stuff, I retired to the man cave after dinner to add the aforementioned card 5mm squares to the pair of Atlantas and the City Class gunboat. There were 33 in all, 15 for the City class and 9 each for the two Atlantas. My usual method is to pencil in where the lowest part of the gun port will be and use the roof of the casemate as a reference point when sighting them on opposite sides. This was all well and good with the symmetrical arrangement of the City class, less so with the Atlantas. The Confederate ship appears to have had three equally space gunports along her starboard side looking forwards whilst the port side had two slightly more forward and one to the aft. No matter, it all added to the fun! One thing I do have to think about for the Atlantas is the spar torpedo assembly. I do not want this deployed as it would make the model far too long so the plan is to build this in the travelling position which appears to be straight up at ninety degrees to the hull, possibly angled out at forty five degrees. I need to think about this and some more Google Fu will doubtless be needed.

The plan for today is sealing and undercoating so all four (including the previously readied C.S.S. Mississippi) of the final batch of casemate ironclads will be ready to paint.

Hi David. I have to say that I have also been very impressed by Warbases. They have custom made some parts for me to make approx 1/1200 medieval cogs and galleys for the battle of Sluys.

I am looking forward to seeing your cogs and galleys for sure! The grey card paints well enough - I tend to seal it prior to undercoating and then use enamel paint on it and it works well enough.