In the footsteps of Ebeneezer Scrooge....

....or A Christmas Carol revisited 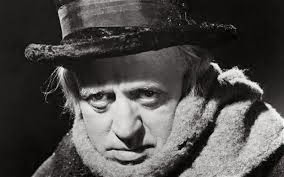 Readers of the blog will doubtless be aware that I work in the City of London; a mere five minutes from the Bank of England in Threadneedle Street. The area surrounding the 'Old Lady of Threadneedle Street' is a fascinating myriad of buildings old and new; of small alleyways and secret courtyards lost within modern and classical office buildings, shops and hostelries of every type. Of particular interest in this respect is the block between Cornhill and Lombard Street - it is full of small alleyways and with surprises appearing at almost every turn.

One my personal seasonal traditions is to reread Charles Dickens book - A Christmas Carol during the week before Christmas. I have done this for many years now and always enjoy the experience; more so this year because my offices are located virtually in the heart of where most of the book was actually set - within the heart of the City of London.

Whilst Dickens does not offer much in the way of actual place names in his book by virtue of some local knowledge and some 'google-fu'; together with my trusty electronic copy of A Christmas Carol, I have managed to identify a couple of places featured in his story.

Ebeneezer Scrooge was a businessman with offices in the City of London. The actual location of  'Scrooge and Marleys' is not revealed although reference is made to him conducting business in or around the Royal Exchange as Dickens described 'Scrooge's name was good upon 'Change, for anything he chose to put his hand to.' At the time of writing A Christmas Carol (1843) the present Royal Excahnge building was still under construction and was not finished until 1844, the previous building had burned down in a fire in 1838. However, across the way from Cornhill is Change Alley so did Scrooge conduct his business there perchance? 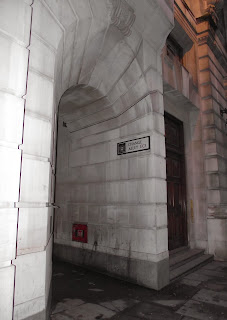 Change Alley - the site of many small businesses in Victorian times, benefiting from the building work being undertaken in the construction of the new Royal Exchange. Did Scrooge have an office in here?

Of one thing we can be absolutely certain of is Cornhill, which is mentioned when Bob Cratchit, Scrooge's downtrodden clerk, 'went down a slide on Cornhill, at the end of a lane of boys, twenty times, in honour of it being Christmas Eve,' and there is indeed a slope from roughly the exit of Change Alley down to Poultry. 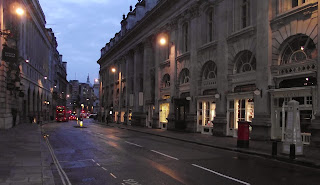 Looking down Cornhill. Change Alley is on the left and the right is the new Royal Exchange building completed in 1844 - the year after A Christmas Carol was published. Note the water pump on the right hand side near the post box and the dome of St Paul's Cathedral in the distance, complete with its churchyard .

The water pump is not mentioned in the book per se but I reckon that is contributed to the slide that Bob Cratchit used as it was originally erected in 1790 for watering horses so it would not be beyond the realms of possibility that the sloops had congealed into ice and ran away down the slope towards Poultry. 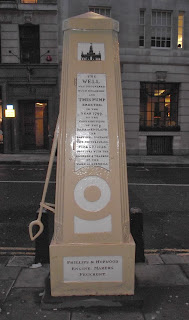 The Cornhill water pump erected in 1790. the trough was still there until quite recently although all that now remains is the two supports you can see on either side.

When Scrooge left his offices to head home he stopped off and 'took his melancholy dinner in his usual melancholy tavern'. Now I have a theory about this. I reckon that he probably made used of either of the following two hostelries - the George and Vulture or possibly the  Jamaica Wine House or the Jampot as it is known locally. 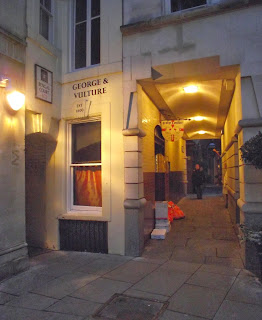 The George and Vulture - now primarily an eatery with the small alleyway leading to.... 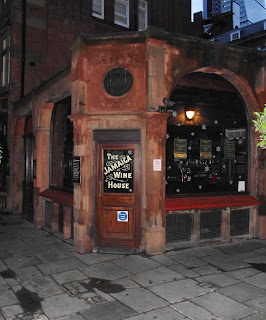 The Jamaica Wine House is certainly quite dark and melancholy on the inside as it boasts much in the way of dark wood paneling and numerous booths - just right for a solitary diner.

The above venue also features in as a possibility supporting my next theory - no less than where Scrooge actually lived.

'They were a gloomy suite of rooms, in a lowering pile of building up a yard, where it had so little business to be that one could scarcely help fancying it must have run there when it was a young house, playing at hide-and-seek with the other houses, and forgotten the way out again.'

In my mind's eye I see a small house tucked in a corner, surrounded by other taller buildings. 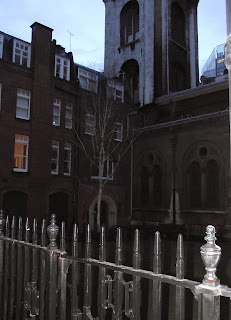 Is that house in the middle of the picture that of Scrooge?

The block of buildings you see to the left back on to the Jamaica Wine House which is significant as the cellars run under the house. This is mentioned when Marley's ghost arrives 'as if some person were dragging a heavy chain over the casks in the wine merchant's cellar.'

With the exception of the 'Cornhill slide' much of the above is speculation and the locations described in the book could easily refer to just about any part of the city at some point. For me though, as I took these pictures this morning on Christmas Eve I could not help but think about whether or not Charles Dickens wandered around these very streets and alleyways when coming up with the idea for A Christmas Carol some 170 years ago.

It only remains for me to wish all my readers past, present or yet to come; a very Merry Christmas and and a very peaceful and prosperous 2014. Perhaps I should leave the last word to Tiny Tim,

"God bless us, everyone!"

Excellent post! I had no idea about the City connections of the locations!

I used to work in Cornhill, in the building which adjoins Change Alley (opposite the Mont Blanc shop!)

A Merry Christmas to you and yours - Tony

A very Merry Christmas to you and your family my friends

What a great tradition! Merry Christmas

Many thanks for sharing this post (and for the last year's excellent postings too).

Merry Christmas and looking forward to next years blogs

Fine detective work, David! Merry Christmas to you and yours,
-Steve and Spike

As you may remember there are a lot of alleys around that part of the city - very atmospheric and ideal for a ghost story!

The Mont Blanc pen shop is still there.

If you get to the UK next year I will take you for a beer in the Jamaica!

I love the story and at this tie of year it never fails to put a smile on my face! It is a tradition that has a certain amount of ritual surrounding it - it must be read during the week leading up to Christmas.

Great fun, silly even - but I love it!

Many thanks for your kind comments good sir! I hope that next year will be as interesting and I am pleased that my seasonal offering was enjoyed within the spirit with which it was intended!

Many thanks old chap! Have a great Christmas - both you and the good Spike!