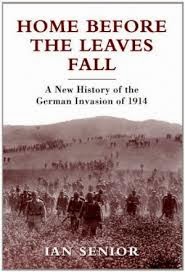 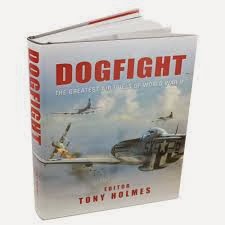 This is an Osprey compilation hardback containing five of the Duel series of WW2 fighter match ups. 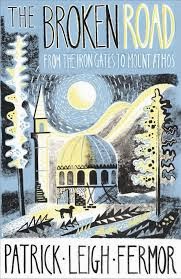 Crossing the Balkans on foot during the 1930s- the third part of the trilogy published after the author's death in 2011.

Well the Christmas day festivities have been and gone - the turkey has been eaten (well half of it has), numerous glasses of seasonal cheer have been drunk and the presents unwrapped. I have done very well this year and no mistake! Aside from the three books you see above I also acquired five Blu-Rays - The Message starring Anthony Quinn, Conan the Barbarian starring Arnie and also the Matrix trilogy. There was also a vast quantity of chocolate and sundry other items and a small sum of cash courtesy of my son that will be suitably invested....;-)

Home Before The Leaves Fall by Ian Senior (published by Osprey ISBN 978 1 84908 843 5) is a study of the German invasion of 1914 and focuses on the German and French actions during the opening weeks of World War 1 as seen from the German perspective. This is a refreshing change from the more usual accounts of the B.E.F and it is an area that I am keen to investigate further. There are plenty of supporting maps and orders of battle included so I fully expect to get a lot of block-based scenario ideas from this. My copy came courtesy of my son - via the monies he treated the 'old man' with for Christmas for the princely sum of £4.99 down from £18.99 as sold in The Works.

Dogfight edited by Tony Holmes (published by Osprey ISBN 978 1 84908 482 6) is a compliation title of five of the 'Duel' series. The match-ups consist of the following:


I will enjoy this and hope that it will give me sufficient inspiration to get cracking with the painting of my Axis and Allies Angels 20 aircraft. Again, my copy came courtesy of my son for the princely sum of £6.99 down from £20.00 as sold in The Works.

The Broken Road - From the Iron Gates to Mount Athos by Patrick Leigh Fermor (published by John Murray ISBN 978 1 84854 752 0) is the third volume of his trilogy describing how, as a young man of eighteen, the author decided to walk from the Hook of Holland to Istanbul during the 1930s. I now need to get a hold of the first two volumes!

I first discovered Patrick Leigh Fermor in the book Ill Met by Moonlight written by W. Stanley Moss - the story of the kidnap of the German General Kriepe from the island of Crete during World War 2. I also discovered several large quotes from his book The Wandering Tree (about his travels in the Caribbean) mentioned in Ian Fleming's James Bond novel Live and Let Die.

I am a huge fan of travel writings and so when I discovered that he had undertaken the journey culminating in the Broken Road (although as mentioned this was published posthumously) I was hooked - especially as the area he had traversed was the Balkans and Greece!

One to savour methinks!

All in all then I have been very fortunate this year and still have some funds to be invested although into what exactly is another matter entirely!
Posted by David Crook at 17:14

I too like PLF and have been tempted by this too.I will be intereted to see what you make of it...

I am trying to avoid reading it until I have the two earlier volumes but am weakening by the hour! It would be really good if the publishers would reprint them in hardback to form the set. I will let you know though - and you can pick this up very cheaply at the moment as well.