Lion of the Desert 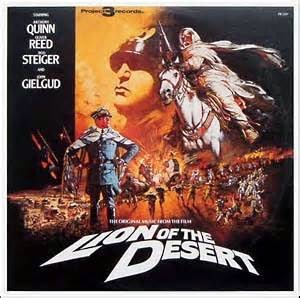 This weekend has been one that turned out completely different from was originally planned - Christmas domesticity rearing its seasonal head once again - and the panting plan has gone right out of the window!

I will not bore you with all the tawdry details - suffice it say that much driving around, raking of leaves, redesigning the Christmas decorations and shopping - but the battleship painting has barely moved from last week. What I have managed to do though is to catch up on a film that I have never seen before - the Lion of the Desert starring Anthony Quinn and Oliver Reed. I recently picked up a cheap copy on Blu-Ray and I have to say I was really impressed! The whole campaign - about which I know absolutely nothing although I have some material on the earlier Sanussi Revolt and the Italo-Turkish War - would make for a really interesting wargames campaign.

Omar Mukhtar (played by Anthony Quinn) was fighting against the Italians since 1911 until he was captured and hung by the Fascist colonial forces under the command of General Rodolfo Graziani (Played by Oliver Reed).

During this time Mukhtar gave the better equipped and far more numerous Italian forces a real run around using his superior knowledge of the terrain to full effect.

I certainly need to find out more about the Italian occupation - starting with the original invasion during the war with Turkey.
Posted by David Crook at 19:13

I saw this film many years ago and have a copy on DVD. It is an interesting story, and could be a source of interwar Colonial scenarios.

It is crying out for a game or two and is certainly worth researching further - which is exactly what I intend doing!