For a variety of reasons this post has taken a while to get to and as a result is in fact a combination of three. Christmas has been and gone but Maison Crook has been busy with all the usual pleasantries - Christmas Eve at the local church for their Christingle concert, family visits and the sheer joy of having our 5 year old grandson to stay. Needless to say industrial sized quantities of Lego have been built and repaired as well as umpteen readings of the assorted Marvel Heroes adventures (note to self - I must make a concerted effort to acquaint myself further with the adventures of Iron Man and Captain America). We have certainly eaten too much and and have (probably) drank too much as well but it is only once a year after all. 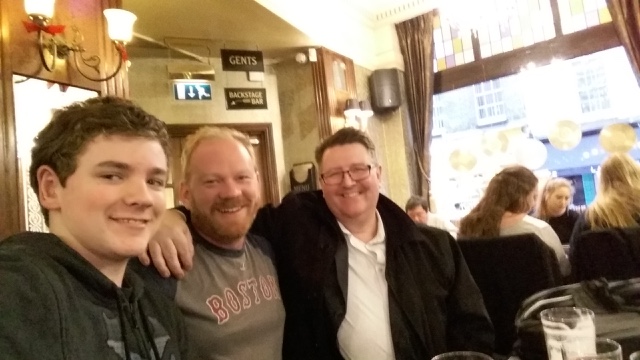 The three stooges meeting on a rather wet Monday in the heart of the West End of London. Yours truly on the right, Paul in the centre and Reilly doing the honours in respect of the 'Selfie'

At a personal level the holiday season really started on Monday 21/12 when I had the pleasure of meeting my long time partner in VSF crime - the redoubtable Paul O'Grady and his son 'Right Stuff' Reilly. For a short while before the day we may have also had the company of Bob Cordery but sadly he had to pass due to unforeseen circumstances. Nevertheless we hoisted a cold one in his honour.

The last time I met up with Paul was around 6 years ago so it was a real delight when he mentioned that he and his family were passing through London en route down under (via Norway for Christmas) and that a meeting could be slotted in. We spent a very pleasant Monday afternoon including a very good lunch, numerous examples of the Brewers art (ahem...) and a flying visit to both the Orc's Nest and Forbidden Planet. We talked gaming, life, the universe and everything in it - and also swapped a couple of purchases to avoid ruinous shipping charges. I will describe mine a little later but will refrain from mentioning my side of the arrangement as I am sure that Paul will prefer that pleasure in due course! Reilly is a delight to talk to and I have seldom met a more grounded and mature 14 year old - you do not get to be an Eagle Scout for nothing - and it was a privilege to meet him. I would certainly not want to play Bloodbowl with him though - he sounds far too good for my modest abilities! 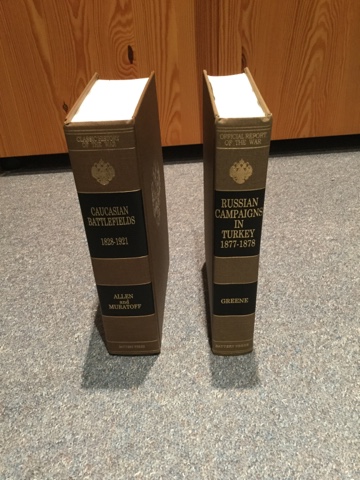 The title on the left I have coveted for some years now - I did not paying some £40 for the UK paperback version though! The title on the right came as a very unexpected surprise - and one that I am truly grateful for!

My half of our mutual purchase arrangement was a hardback copy of a book I have been after for some time but was reluctant to order from the US as the shipping would have been expensive and the value of the item would be sure to incur customs charges. Taking both of these factors into consideration it would mean that the price would have been effectively double - and certainly not financially viable for my budget. A paperback version is available in the UK but this is in fact dearer than the hardback version from the US and if I am honest, I really begrudge paying out more than the cost of an Osprey campaign title in softback. An exchange of emails with Paul whilst he was in the US meant that he acquired this for me and carried to the UK whilst I got some goodies for him (top secret at the moment!) - with the exchange taking place over a couple of very nice beers. What I was not expecting though is that Paul had also acquired the Russian Campaign title by way of a surprise for little old me! I can't thank him enough for this gesture and it is a very welcome addition to the Russo-Turkish section of the library. The Allan and Muratoff title covers everything you wanted to know about the campaigns in the Caucasus between 1828 and 1921 between the Russians and the Turks - maps, orders of battle, campaign details - everything the aspiring war-games campaigner could need! I will review both of these titles in more detail once I have had the chance to read them.

So to sum up this part of the post I had a really good afternoon with an old friend and his son which really set the tone for Christmas. I should also point out that whilst the new Star Wars film was discussed at length Paul was diplomatic enough NOT to tell me what happened other than that they both really enjoyed it! 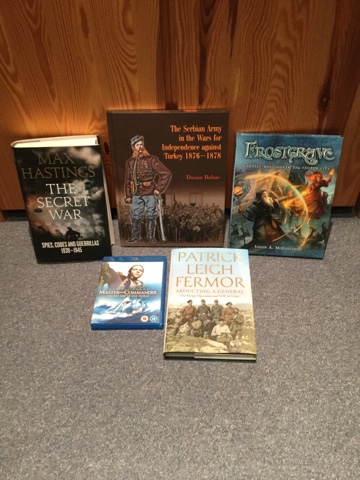 Christmas loot - and it rather reflects my somewhat eclectic tastes! The Serbian title further complements my growing Balkan collection.

As far as the Christmas present haul was concerned I was a very lucky chap indeed! My fondness for anything Balkans related was acknowledged by SWMBO who also knows that I am a sucker for anything to do with spying, secret agents and special operations (I have bored her incessantly over the years - especially as I recall when we went to Crete for a holiday - the scene of the operation described by Patrick Leigh Fermor) hence the new Max Hastings title and Patrick Leigh Fermor's account of the kidnap of General Kriepe. SWMBO also surprised me with the copy of Frostgrave - rather she surprised me when I said I was going to get it so she could wrap it up for me for Christmas - she readily agreed which in itself was rather unusual! I enjoyed Master and Commander on DVD so the Blu-Ray was a welcome surprise from Holly who is currently home from University. Finally my son, Reece, surprised his old man with a very welcome £50 Waterstone's voucher which I am sure to put to good use.

Holly, the redoubtable Mr Fox and myself are going to see the new Star Wars film tomorrow and needless to say I am really looking forward to this. I would ask respectfully that any readers refrain from posting any spoilers by way of comments although I have a pretty good idea of what happens and I also have a theory about what will happen in Episode 8 and 9....:-)

So in closing I hope that you all had a very pleasant Christmas and in case I do not get the chance to post again before 2016 have a healthy and safe new year!

It was a great time and I hope that you and yours had the same! I am sure our paths will cross in the new year and so I will join you in looking forward to it.

Excellent to hear your having a good one! I saw the Force Awakens yesterday and was thoroughly enjoyed!

Sounds like a good time was had by all.

Thanks David for a great day out! Reilly and I both had a ball (though he admittedly had a few less beers!).
It was great to catchup, hear all your news, natter about past achievements and plan new ones.
Glad you liked your present, I just had to get it for you after listening to you wax lyrical about the topic for over a decade!

As always I'll look forward to our next get together and hopefully the redoubtable Mr Fox can join us.
Actually, isn't it your turn to visit me? :-)

Happy new year to you! From 21/12 to date I have had a very enjoyable time with friends and family with plenty of seasonal cheer, good food and drink and some really inspiring presents. I hope yours was as good. My thoughts on the Star Wars film will follow - I thought it was really good and augers well for episode 8 and 9.

It has been a blast and I hope yours has been as well!

Happy New Year to you and yours! The present has given me much food for thought and no less than 4 periods to try out! Seriously though, it was a magnificent gesture and I will be sure to continue waxing lyrical for the next decade....

We have family in NZ and I have given a lot of thought to getting out to your part of the world - it will not be this year though for a couple of reasons.

I reckon Mr Fox would be up for it should be over here anytime soon - as would Bob - so we will have to see what happens.

The Force Awakens was very good - needless to say it has also given me a few other ideas to mess around with!