The Heroscape US Airborne figures in their original finish

It has been a busy couple of weeks so the blog has dried up slightly. Work has been frantic and I have also been suffering from a chesty cough which has been particularly tenacious. The net result of this is that little has been done in a practical sense. I have managed to get some planning done and the reading has caught up - I am a fanatical user of my commuting time on the train - but nothing tangible on the gaming front. I have set up and action to fight and this is what forms the subject for this post. The battle has yet to be fought as I need to finalise the rules I have been working on - a Sci-Fi version of Command and Colours or, more specifically, Bob Cordery's MOMBAT or Memoir of Modern Battle.

The game has been set up using some of the recently acquired collection of Heroscape figures and a standard Command and Colours playing area of 13 x 9 Hexon tiles. The figures in use are the WW2 US Paratroopers and the alien Marro. The terrain consists of a number of trees from my collection (and I need to base them on something smaller than present), a scattering of hills including a small plateau, a ruined research centre, the magnificent Marro Hive and a number of rough hexes designated by the liberal use of an old aquarium plant broken up into segments. They are a little rough looking at the moment but will have some work in due course to make them a little more alien looking.

A selection of the Alien Marro figures. The chap on the right is a conversion - although not one of mine, the picture is courtesy of Google Images.

I set great store by having a background to whatever wargame I play and Sci-Fi and Fantasy games are no exception. What I have decided on for this little mini project falls very much into the Weird War 2/Secrets of the Third Reich category - although with a little twist as it features Imperial Japan.

When U234 arrived in Tokyo Bay and mid 1945 few could have foreseen the impact its small cargo would have. Aside from quantities of Uranium Oxide and a crated Me 262 jet fighter there was also a a small number of V 4 containers. It was the V 4 chemical that the Nazis used to such devastating effect in the creation of the dreaded Sturm and Bomber Zombies used in their top secret underground Gibraltar base. The V 4 containers were sent under heavy escort to the secret laboratory used by unit 731 for their chemical and biological weapon development  - with volunteers selected from the Kami Kaze corps and also from a local Sumo wrestling academy. 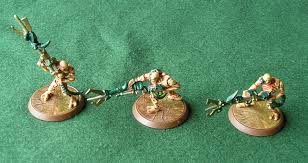 Following the application of the chemical it was quickly realised that something had gone. During transit from Germany on board  U234 the V 4 had been stored next to the Uranium Oxide. Unfortunately the Uranium Oxide was not sealed correctly and was therefore able to contaminate the V 4 chemical. This contamination caused the V 4 to completely reorganise the victims body chemistry to make them very different from what was intended. Essentially the victims body chemistry was completely reordered and gave rise to a very different life form - a life form that was ferocious, cunning and above all, sentient.

Initially the Japanese scientists opted to keep the Kaiju or 'monster' in a secure holding area in the laboratory complex as the initial batch had already killed a number of investigating scientists and armed guards. As well as being ferocious close combat specialists the Kaiju possessed the ability to convert certain mechanical items into biological versions of the same by coating the said object in a secreted bodily fluid - as a result of this they were soon able to arm themselves with 'living guns'.

The Kaiju were 'asexual' and were able to lay eggs to produce their offspring so in a fairly short space of time they quickly increased their numbers. The Japanese scientists, realising that this experiment had gone very wrong were going to blow the entire complex up to eradicate the menace within.

The Marro Hive - note the 'eggs'. Early indications are that it is made from some kind of secreted resin - but secreted from what?

They were too late - the USAAF did this for them in the shape of a vast B29 raid that destroyed the laboratory, the out buildings and everything in it.

The Americans were aware that the Japanese had been experimenting with the German V 4 chemical and so assumed that by way of survivors from the bombing raid (assuming there were any) all they would encounter would some of the Zombie types. A special Airborne unit was hurriedly assembled with the intention of dropping on the site, collecting any data that may still be found and getting the results back to the US Intelligence service in advance of the landing being planned.

It would be quick 'smash and grab' raid and as the troop transports headed off into the Japanese night sky the paratroopers confidence was high.

Good man. Get to it young Crook.

Many thanks old chap! The game is set up and the rules for use with it are pretty much done so I hope to be in action over the weekend. I also have a number of rather exciting ideas for use with all the other models in the collection so watch this space!

It will be a little light entertainment for sure - thinks Aliens only set in WW2....;-)

If I am honest I am unsure how far I will progress with this but it will give some fun games in the short term. My thoughts around the rest of the Heroscape figures will be a lot more fun methinks.

I am also looking forward to tackling the repainting of some of the figures - especially the Viking types and also the Samurai.