Enemy on the Euphrates 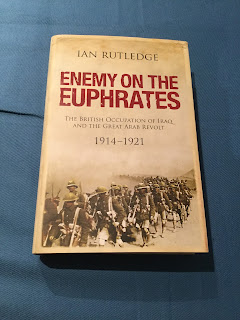 Fancy that, ANOTHER Arab Revolt - this time with Lawrence on the periphery.

Mention the Arab Revolt and one usually conjures up visions of Peter O'Toole and the haunting strains of Maurice Jarre's sweeping soundtrack - complete with camels. As much as I am interested in that particular affair there was a much bigger turn of events it what became Iraq after the end of the Great War.

At one point the Imperial garrisons faced an uprising of around 130,000 tribesman of assorted types, all hellbent on securing independence - or, to be more accurate, going back to how things were before the British got involved. The whole of Middle East was in turmoil after the defeat of the Turks and the British and French managed to make a pig's breakfast of handling the area.

From the gaming perspective this is a very rich seam to tap. For example we have armoured trains, river gunboats, relief columns, marauding tribesman, religious fanatics, aircraft and armoured cars. The British fought the Arabs and the Arabs fought amongst themselves so the potential from a gaming perspective is pretty darned impressive.

I would recommend this book to anyone looking for something a little different at the end of WW1 - it is certainly a seam I shall be tapping into.
Posted by David Crook at 19:10

Oh, that one looks interesting!

It is a very inspirational read and in many ways is almost Colonial in its scope and scale. I am very pleased with it and watch this space for future developments!