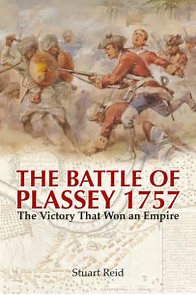 Something completely out of the blue I know but I could not resist it! I have an occasional interest in the 18th century - mainly due to Charge! if I am honest - and this has tended in the past to be mainly Seven Years War in Europe based with the occasional foray into the American Revolution. However, I have recently been revisiting the campaigns on the 'fringes of Empire' if you like, namely the French and Indian War and also the wars in India.

As a perennial 'small war' enthusiast neither of the above should come as any surprise...

I am very fond of Stuart Reid's titles and so when the above was advertised I was always going to buy the same. The Battle of Plassey was the battle that cemented Great Britain's place as the upcoming premier power on the subcontinent and made the fortune of Robert Clive, one of my historical interests alongside T.E. Lawrence and others.

The book follows the usual Reid template with notes etc at the end of each chapter and an easy, readable writing style. I am going to savour this and will probably revisit Robert Harvey's excellent biography of Clive as a result.

Would I ever game the period? I doubt it as to do it just would require far more time and effort to produce armies for this than I would be prepared to devote but I would certainly consider a board game on the period if such existed.

As an aside it has also reminded me that there is one other book on the period I need to acquire. Just one, maybe two....

Guilty as charged but in the words of one of your famous countrymen "I can resist anything except temptation"....

Seriously though, I have looked at this particular area from a gaming perspective many times and whilst there are a number of bloggers tackling it the whole thing would need more time, effort, energy and determination than I possess to do the subject justice.

Perhaps after a Euromillions lottery win....