OGRE the hills and Fire away.... 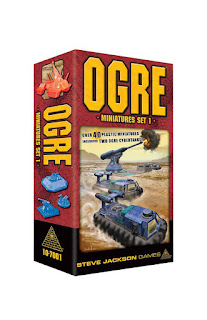 I have always enjoyed the Sci Fi game of OGRE by Steve Jackson. Ever since it first came out (along with the companion/expansion game G.E.V) as a small budget price game contained in a box not much larger than a smart phone it has followed me around.

For those that are unfamiliar with OGRE it is a very simple game in which the basic, classic scenario pits a single OGRE against a variety of opposition unit types. The victory conditions are very simple - the OGRE player has to destroy the enemy command post whilst the defenders have to stop the OGRE.

The OGRE is a self aware cyber tank armed like a battleship and able to engage multiple targets. The defenders have an array of power armoured infantry, heavy tanks, missile tanks, howitzers and G.E.V.

There have been a number of versions of the game and also some miniatures rules to support the metal models that were available to support them. These now command some high prices and so when Steve Jackson games launched a kick starter project to release the models in plastic I was highly delighted. I did not take part in the kick start project (I did not need to as it was funded very early on) but have finally gotten around to acquiring a set of the miniatures - and very nice they are indeed! 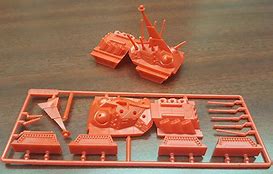 The classic OGRE - this is the Mark V version and is scaled for (roughly) 1/285th and comes in 9cm long!
OGRE is played on a hexed grid and whilst I have the current version of the game with the 3D card OGRE models (and very nice they look as well) I always wanted to tackle the game using models Given the size of the playing are used it would not be practical to use a hex that the models fit on - I am thinking Hexon here - so I am planning to use Hersoscape tiles to model the classis OGRE battlefield. Although the OGRE model above would take up two hexes Steve Jackson has already addressed this problem very early on in the games' history. Essentially the OGRE only occupies the leading hex and so all measurements for movement and firing are directed there. Using Hexon would be an option but it would take up too much room in the man cave so a smaller option would the preferred choice. As you can see from the picture below this is very much in the desert, post nuclear apocalyptic style of terrain so constructing something similar would also be useful for my planned WW2 desert adventures. 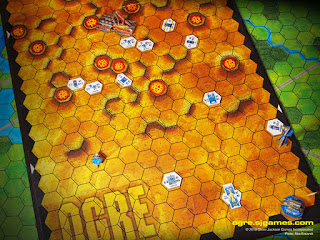 The classic OGRE battlefield. Later editions of the game included other terrain types - usually (as I recall) as an overlay.
﻿
﻿
﻿
The box set of miniatures are of course usable for other Sci Fi based games and I do not expect them to be solely used for OGRE. I will acquire the second set and can see myself buying more of them but for now I will content myself with what I have - and very nice it is as well.
﻿
﻿
﻿
Posted by David Crook at 13:31

The models are little beauties and this is quite a self contained project in many ways as I have virtually everything I need for the basic game. I am hoping it will galvanise me into doing something with my Heroscape tiles that I have been planning for an age in any event.