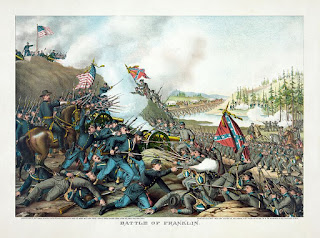 Kurz and Allison with some very dapper looking Confederates for 1864!

This year so far has been largely occupied with sorting out the collection of Eric Knowles – so much so that most of my own projects have ground to an ignominious halt. I am not bothered by this although as the days turn into weeks and then months I am becoming more aware of my apparent lack of progress in, well, any direction other than packing figures for posting!

It is true that I have made a few acquisitions this year but to be honest, other than skimming through the various rules or books that have been added to the collection, I have invested little other than the odd half an hour or so, usually on the train during the daily commute.

However, now that I am close to a temporary break in the grand disposal, I have taken a little time out to revisit the ideas I was looking to tackle this year. First and foremost is of course the Spencer Smith 30mm ACW Kurz and Allison based collection. With the release of the Portable Napoleonic Wargame followed by A Gentleman’s War and Rebels and Patriots, I finally have the rules that I want to use for the collection once it is ready for action. These three sets of rules between them will cater for most of my immediate gaming needs as they cover virtually every scale of action from army level down to skirmish - and cover both grid based and free table usage. The first order of business though, even before the paints come out, is to acquire a few extra figures from Spencer Smith. I will also need to revisit the basing I shall be using as I am leaning very much towards individual figures rather than on multiples.

In support of this project will also be the need to tackle the naval dimension but certainly not to the same scale as previously! If you recall from some years back I scratch built around 50 assorted ships for use on the rivers and swampy bayous of the US of A. Some of these models featured in a couple of games in the games folder if you want to see them again. They were all built with one overriding rule – none of them were larger than 4” long so as to be able to fit in a single Hexon tile. The models I will be building in support of the Kurz and Allison project will be far fewer in number and larger than their predecessors. I have a Peter Pig Hammerin’ Iron gaming mat which uses hexes of 5.5” across the flat edges so the models will be built to that size. I will also be making them ‘cartoon style’ in that they will be taller than you would expect. As I intend using these alongside the 30mm figures the extra height will help with the overall look of the thing.

Once I have this phase of the disposal of Eric's collection suitably 'battened down' I shall be taking advantage of the break to address the ACW project, at least in terms of fine tuning the resources needed.

For the record I ma really looking forward to this!