Even More on Eric’s Napoleonic Collection I have to say that sorting out this portion of Eric’s overall collection has not been a pleasurable experience! Frankly it is a mess. There are jumbled units, figures off bases and guns, crews and limbers residing in separate boxes. Throw in the usual Eric mixture of manufacturers - usually within the same unit - move on from the period in question (as Eric did), dispose of a big chunk of it, put the remnants into boxes and store, throw in several house moves and voila! You have me reduced to a gibbering wreck ‘Trying to make some of it all, when you see it makes no sense at all.....’ I should point out that in no way am I blaming anybody for this, least of all Eric, but time and circumstance have conspired to make a pig’s breakfast of what must have been originally a truly magnificent collection.

It has been a real effort to sort this lot out but I think I am finally getting a handle on it. In truth a lot of bits and pieces are moving on to their new homes but there is still a fair amount of stuff left. Luckily this can be partially offset by the fact that my Del Prado collection can make use of the old and unloved - a quick rebase, a touch where needed and lashings of gloss varnish Will hide a multitude of sins! I have been wading through what I thought was the last of it  - the aforementioned and thrice cursed artillery - when I came across a box of cavalry, specifically French Cavalry. 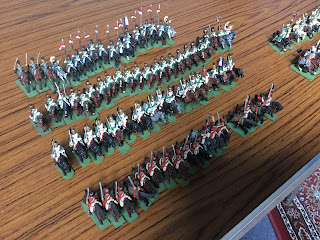 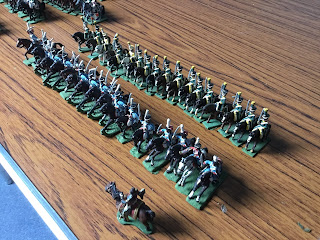 These appear to be a mixture of Lamming and Minifigs S Range and despite the prolonged period of storage are not in bad shape at all - certainly nothing a dab of superglue here and there, a rebase and lashings of gloss varnish wouldn’t put right. Assuming that no buyers can be found for them then I shall take a few figures from each to add to my Del Prado collection - bearing in mind that my cavalry units are anything from 2 to 5 figures strong. I have to say that I am quite excited at the prospect of adding a few of Eric’s figures to me collection and it would be good to see them take to the tabletop once again.

Now the photo at the head of this post is that of a book I have read many times in the past but have been without a copy until very recently. It is quite superb and it is a theatre I would like to explore in rather more detail. Eric served in Burma from late 1944 I believe and during his retirement years when his wargaming moved into WW2, he amassed some truly Eric sized armies. The painted collection  - which Bill assures me is enormous - will be the next up for disposal but there was also a fair amount of unpainted stuff. Eric was very fastidious at organising his units and so boxes of figures with the name of the unit and all the required figures was a major help when I was sorting it all out.

The last unpainted army of his was for a 1944 14th army and in true Eric tradition this is complete with the usual range of manufacturers, all the appropriate supporting arms and organised down to platoon/section level. His rules of choice were, I believe, Rapid Fire which are a very ‘Eric’ style set.

Where do I come in?

Well, I have been looking out for a WW2 project that would not be too armour heavy and would be a little off the mainstream. I wanted primarily an infantry style set up so the theatre certainly ticks that particular box. For vehicles there are of course those wonderful Japanese tanks as well M3s amongst others for the allies. The fighting was intense, brutal, up close and personal and with little quarter asked or given. Horrible stuff in respect of history and very challenging to work effectively on the tabletop. For my tank battle fix I would naturally be looking at Europe and 1:600th - the desert would be fun but everything I have is for the former.

To be honest I could take an expanded Portable Wargame sized force out of the number of figures that Eric had amassed with it scarcely making a dent in the entire collection and so this is my plan. I have some Japanese on order and will think about the vehicles in due course. The Japanese force will be key as they can take on plenty of other armies so the prospect of tying this in ultimately with island hopping and Flat Top (bring on the US) is a compelling one.

It would also be in a small way a tribute to the man that made this all possible.

That cavalry is a very impressive sight, and you’ve done marvels sorting out his collection!

I think that the 14th Army is an excellent choice, and with some of Eric’s figures as your starting point, you should be able to put together a couple of great PW armies.

It has been a real challenge sorting this lot out and I will not be sorry to see the last of it! The discovery of all the French cavalry was a surprise but I reckon that should it not end up going anywhere there could well be some new units appearing in the Del Prado collection!

I must admit that the surprise appearance of the 14th Army really gave me pause for thought - and it would be ideal PW fodder!

Something a little different but with a lot of potential.

Napoleonics scares me .. what scale and what army and what rules

Eric’s Napoleonics appear to be solely Waterloo period British and French although he did have some Russians at one point.