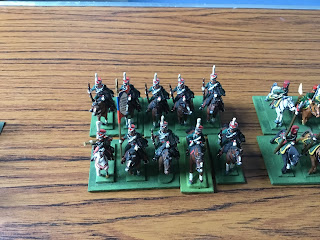 A mystery unit that after investigation turned out to be French Garde D’Honneur. In my Napoleonic set up there are 2 or 3 units worth present! The uniform plate from volume 2 of the Funcken Napoleonic titles

The sorting out of the remnant’s of Eric’s Napoleonic collection continues apace - it is a pleasant diversion in the evenings - and homes have been found for a goodly chunk of it. There is a fair bit left  but I have Carte Blanche to cherry pick any bits and pieces that might take my fancy to add to my own collection. In truth this would probably only be of use to someone that uses small representational units a la Command and Colours or the Portable Napoleonic Wargame so infantry units of 3 to 5 figures, cavalry of 2 to 4 or artillery with a gun and two or three gunners are perfectly acceptable.

The figures that are left over seem to be a mixture of classic Minifigs and Hinchliffe although some others are present - Lamming for example. There is a lot of stuff that to be honest is probably beyond saving but given that this collection has for the most part been in storage for nigh on fifty years and has undergone numerous house moves it is hardly surprising. The figures that remain that I shall be using will be rebased, refurbished where needed - mainly dusting - and given lashings of gloss varnish. It will be good to get some of these veteran warriors on the tabletop once again.

The infantry units that are going to be used in this way consist of Nassauers, Brunswick Avant Garde Jägers,  Old Guard Grenadiers in Greatcoats and Highlanders. There is also a lot of gun crews - British and French - that could be used, not to mention a selection of gun models on a truly biblical scale!

The rather dashing unit at the top of this post - the Garde D’Honneur had a rather short service life being raised in 1813 and disbanded the following year. They were originally the sons of the wealthy and ‘nobility’ that volunteered to help address the crippling losses that the cavalry sustained during 1812. The volunteers supplied their own mounts and equipment and initially there were around 15,000 of them bringing some 20,000 horses. Originally they were known as Lifeguards but thanks to a high rate of desertion this was downgraded to Garde D’Honneur. They served with the Imperial Guard but did not have guard status. Although not around for 1815 this is a lovely looking unit that is too good not to use!

They are a nice looking unit Dave.

The unit next to the Garde D'Honneur look to be Éclaireurs of the Guard. Interesting the figure in the rear right is an Alberken Scout Lancer and I have 5 of theee painted exactly the same judging by the horse colour. I seem to have some of Eric's figures as well.

Now that is a coincidence! There was only a single one of these in the unit as the remainder were S Range. I know that Eric disposed of elements of his collection way back in the early 1980s but where they went I have no idea.

I am guessing that you have had these figures for some time! It would be interesting to know the story behind your figures.

I got there figures as part of trade a couple of years ago with a friend of mine who lives in Essex. They had been part of a collection of a gamer who had recently passed away.

I have dropped you an email.