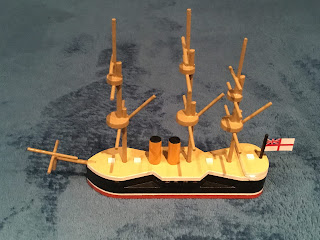 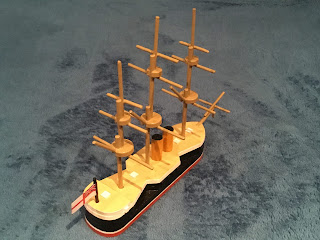 Surprisingly quick to build and the only heart stopping moment was the removal of the masking tape! 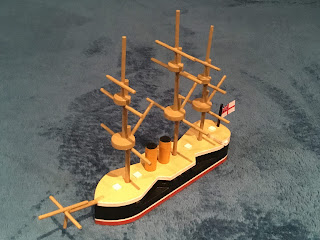 There are liberties taken a-plenty with this build but she does the job and will be in reserve until I can build the rest of the squadron!

Just to show that I am as weak willed as the rest of us I sneaked in a minor detour from the ACW naval project - simply because I wanted to! In my defence there is a justifiable justification for my doing this as this is a model that would have been built at the appropriate time so the only crime I am guilty of is building her out of sequence!

I am not going to describe in detail the actual historical career of this ship and her sister simply because it is ground that has been covered in far better detail than I would have done by no less than Bob Cordery himself. You would have to go back sometime to ‘read all about it’ though and so the link is here - A tale of two sisters

If you have read Bob’s excellent blog post then matters become a whole lot clearer. I will be building ships for the Russo Turkish War and so duly organised the hull templates to be cut by Warbases for the Turkish ironclads which I now have. I had ordered three sets of templates for the each of the models I am building despite there only being two ships in each of the three classes I was aiming for. The reason for this was twofold. Firstly, there was a spare should anything go dramatically wrong during the build and secondly, assuming that nothing had gone wrong with the build then I would have the necessary parts to make each of the ships when they were rebuilt for later use - mainly for the Balkan Wars.

So far so good. However, this was complicated by the fact that of the two Messudieh class ships ordered the Turks only got one with the other being rebadged (and remodelled slightly) by the Royal Navy.  Never mind. I plan to build BOTH the Turkish ships (allowing them to have taken delivery of the pair of them) AND the Royal Navy version which you see above.

As is usual with my models this is very much ‘based upon’ rather than historically accurate. To begin with the central box battery should be around 1/4” longer which has meant that I have had to use smaller gun port covers. My usual size is 5mm square but these are 3mm square - mercifully there are not many of them! The rig is mostly correct although again, the needs of the gamer outweigh the needs of the modeller, or the model and so much use has been made of industrial quantities of super glue and cunning placements of spars etc to ensure a better surface contact.

The construction method was simple and the key with this is to make sure you have all the bits and pieces you need at the outset. Once the templates had arrived I glued the central four together leaving the bottom and top layers separate. The reason for this was very simple. The white trim around the top of the hull and the red and white of the lower hull are easier to paint away from the main hull. It is easier to get the lines straight! With a 3mm thick layer on top of the hull you can see the razor sharp edge achieved. I needed to use masking tape on the white edging to the red lower hull after it had been glued in place - remember the tape needs something to stick to whilst it is masking. I use Tamiya masking tape and it is really high quality. Once the  main deck has been painted it can then be glued to the hull.

The masts are made of bamboo skewers with the spars from wooden cocktail sticks with the funnels from dowel rod. The fighting tops are again pre cut by Warbases and slip over the masts so providing a really good place to glue. They are not difficult to make but you need to be careful making sure everything is square. For the record making all three masts and the bowsprit took me about an hour or so. Once they are painted and varnished they can then be dropped in the pre drilled locating holes. I went with the mainmast first and worked around it with the bowsprit going on last of all. After another coat of varnish and adding the flag H.M.S. Superb was ready.

For all her shortcomings I am rather pleased with how she has come out and I have to say that building masts is pretty straightforward and oddly relaxing - don’t ask me to rig them though!

Something I did not know was that H.M.S. Superb was quite extensively rebuilt in the later 1880s and I have to say that the prospect of building her later version is something I will certainly be doing as part of the Madasahatta build. This raises the delicious prospect of a rebuilt Messudieh meeting a rebuilt Superb....(despite the fact they never did and Messudieh was rebuilt after Superb - still, makes for an intriguing ‘what if?’).

From such ideas are great games forthcoming....

As well as being a moment of pure self indulgence this model was also very much by way of an experiment. I wanted to tackle a fully masted warship to see where the limits are in respect of my building technique. As built her hull is 18mm tall (21mm including the aft section) and her overall dimensions (including the bowsprit and the mainmast) are 6 1/4” long and 5 1/4” tall. This is about as large as I want to go with my scratch builds so she has served to define some limits for me which is always a good thing.

I will add to the Royal Navy in due course - they will be the last part of the Russo Turkish set up and assuming I do not get sidetracked into anything else - but for now it is back to the ACW.

Many thanks old chap! I will build her in her later guise for Madasahatta. Along with Messudieh of course!

Hi David -
That is a very attractive model indeed! Incidentally, in order to justify the 'Messudiye' (alternate spelling of Messudieh) appearing in one of my fleet actions after recently having taken a whole lot of damage, I supposed that the RN (Ruberian Navy) delivered the sister vessel. I named it 'Muhtesem' - Turkish for 'Superb'...
Cheers,
Ion

Thank you old chap! I liked the name idea you used - that is the sort of thing I like to do myself - as it adds another dimension to the all important background. Similarly I liked the take on the name of your really nice looking gunboat!

There is a lot of work to do before I can get to the rest of the RN squadron but I am pleased that I built her. Her Turkish sister will look pretty much the same except for the flag and the funnel colour although I am also tempted to paint the lower hull green rather than brick red.

That is really, really nice David! The new fleet should look lovely if this is anything to go by:)

Thank you old chap! It will be a while before I get to the rest of the squadron but I am looking forward to doing so. It was both a therapeutic and a learning exercise building her and the latter will stand me in good stead when I go full on masted ironclad!

Meanwhile, back to the ACW!

Many thanks old chap! Much as I liked the 1:2400th stuff I found this lot far easier to work with! It will be a while before the rest of the squadron gets built but I am looking forward to doing so.

I am still building stuff for the ACW and the next four models are currently being assembled.

She’s a lovely looking ship David...
And a very interesting background as well...

Many thanks old chap! I have the Turkish version to build and then the rebuilds for both of them - they will appear in due course, protecting the respective interests of their governments on the island of Madasahatta.

I am also looking forward to expanding the British squadron at the end the Russo Turkish set up.

Wow David, your ships just get better and better. You are drifting in uncharted waters with this ship methinks!

Thank you! There is a whole lot more to come for sure and when I get to the RN I am looking at a further 7 ships at this stage.