Mad, Bad and Dangerous to Know.... 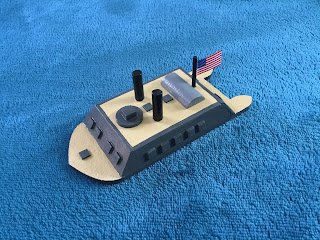 Big, bad and not something you would want to bump into on the broad reaches of the Mississippi...The U.S.S. Benton

I did not expect to be writing this post just yet - more likely it would have been in a couple of days - but one must strike whilst the iron is hot. The domestic situation has taken a significant turn for the better and although it is very much early days one must hope that at last the right route to normality has been found.

I will say no more about this at present but thank you for your thoughts and message of support - as ever they are very much appreciated.

I have finished the first model of the final batch of ships for the ACW project. The great slab you see above is the U.S.S. Benton which started life as catamaran snag boat before being converted into a great hulk of a casemate ironclad gunboat. She will be accompanied in action by the U.S.S. Essex and the two city class gunboats I have - the U.S.S. Carondelet and the U.S.S. Louisville. Together they look something like the below: 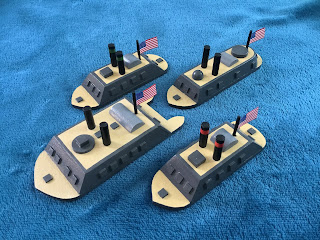 Guaranteed to give any Confederate river based fort something to think about - as long as it is at the right elevation for the guns to reach!

The three Union timberclads are currently under construction and now that what passes for normality has resumed at Chez Crook I can press on with them.

Onwards and upwards and all that!

Good news then David that things are heading in better direction.

Glad to hear things are getting back to an even keel and the USS Benton is a bit of a beast, but looks great, as do the other ships escorting her.

Early days but at least there is now, dare I say it, a roadmap out of the current situation!

It is good news for sure - it has been a while to get there but at last we are now on a sensible path.

Benton was a beast and a half - she started life as a catamaran - and scale wise she is about right compared to the rest of the squadron. As a great man once said ‘I don’t know what they will do to the enemy but by god they frighten me!’

Good news on the domestic and riverine front. Onwards and upwards!

Once again, your models look good. A very impressive flotilla. Glad your domestic front is sorting itself out.
Cheers,
Michael

Many thanks old chap - much appreciated and on both fronts!

Thank you old chap! I am looking forward to tackling something on the new 6ft by 4ft once I have painted it. I am on the last ap with the ships but I still need to think about some terrain. I have a few ideas in mind and to be honest they should be pretty straightforward once I can get to them.

Then it will be something to see!

The domestic front at last has some form of framework in place to get to where we need to be - which is a huge relief for all concerned.