Resistance is Futile? Not really! 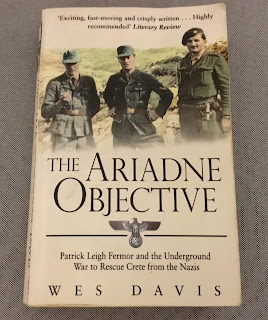 Picked up cheaply from a boot sale sometime ago (20p as I recall) and a cracking read, full of ideas for skirmishes, almost at a role playing level in some cases. I MUST get a copy of the hardback version!

I have always been interested in the exploits of the various resistance groups that operated against the Germans during WW2. The most obvious one, at least in the West, is of course the French resistance although naturally there are many more. Linked with this is of course the involvement of the men and women of the SOE. For the moment I shall confine myself to the operations that took place on the island of Crete following the German invasion that culminated in the capture of the German General Kriepe by Patrick Leigh Fermor and others and immortalised in the book (and film) Ill Met by Moonlight.

The book you see above traces the story of the secret war to make use of the various resistance groups assisted by operatives from SOE. It is story of high drama, stealth, derring-do and endurance. The stakes were high and the repercussions against civilians when an operation was successfully carried out were usually brutal. The whole of the Greek islands are an ideal stamping ground for raids and similar alongside the inserted agents - in many ways there are parallels with what Lawrence and company were doing in Arabia during the Great War - providing specialist support and expertise to the local resistance groups (who occasionally cooperated with one another, but not always).

From a a gaming perspective operations of this sort offer a wealth of potential. Everything from company level sweeps by the occupying forces, ambushes, raids and sabotage operations - all of which are eminently playable. They also have the inestimable advantage of not needing much in the way of material.

In many ways there are two types of operations to consider. There is the purely military type - think the Special Boat Squadron or Long Range Desert Group - and then there is the resistance style of action, with or without the support of the SOE.

Certainly something to think about and in terms of the material needed very achievable. Many of the figures would be easy enough to find although I do not know of anyone that makes Cretan irregulars foe WW2 - yet anyway!

You could even do a post Sealion resistance operation with the stay behind groups that the MOD recruited. Lots of possibilities!

I enjoyed 'Ill Met By Moonlight' so will keep an eye out for this book. Good luck with finding some Cretan irregulars for your games!

Had a documentary from Disney on in the background .. Das Reich's march to Normandy in 1944 .. very unsettling stuff ..

As Spock would have said “There are always possibilities” I must admit that is not one I would have considered but I will try anything once!

Many thanks for the heads up with this - I shall no doubt investigate it and be completely inspired by all manner of strange and wonderful things!

It will be a challenge for sure finding Cretan Irregulars but I shall have a look when I can. Something to think about anyway.

To this day I can still remember Laurence Olivier opening narration for the first episode of The World at War. Chilling stuff and with the ever present threat of reprisals that became more severe as the German situation deteriorated.

Sobering stuff. It does seem a a little incongruous that such a documentary was on the Disney channel….