Ticking Over (Sort of) 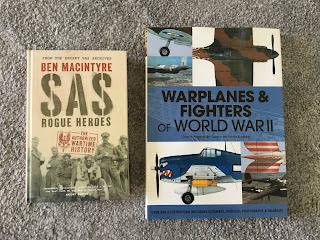 No details, no clues but part of the smorgasbord of randomness circulating in the cavernous expanse of my  imagination

The past couple of weeks have flown by, mostly for all the wrong reasons, but here I am once again! The good news is that Laurel is finally in the system and so is waiting on her initial appointment with the neurologist. This should be by the end of the year. We can then plan next stages etc which will be great news for her and all of us. My brother in law is as well as can be expected under the circumstances but he remains in good sprits although West Ham United losing to Manchester United will not have cheered him up! We have had a further domestic situation to deal with on top of all this - I will not go into details for various reasons - so life at Maison Crook has not exactly been a barrel of laughs.

One must maintain an air of sang froid though, and muddle through, which is what we do.

Needless to say gaming activity has been at a minimum and in truth I have really been unenthusiastic about anything other than looking for stuff to dispose of. I did a little work on the remaining ACW ships but my heart was really not in it so I stepped back and left it alone. I have tackled a lot of reading though, that and thinking about stuff which is my usual default option when life gets in the way.

The slightly modified bases for the block armies are in the hands of Warbases which I am looking forward to receiving. I have some writing to catch up on - the ACW rules as well as an article for Battlefleet (the journal of the Naval Wargames Society) - as well as a few ideas that are circling around.

The biggest thought that has been occupying rather a lot of my time is not what I want to do, rather what I do not want to do. This is the opposite to how I would usually approach my gaming and rather surprisingly it seems to make rather more sense than focussing on what I want! There has been a lot of stuff identified that is now surplus to requirements.

In summary then, and not trying to be too bleak, things are likely to be low key for the foreseeable future although beneath the surface thoughts are being thought, schemes are being schemed and plans are being planned.

Not a great deal different from usual then….

Keep your chin up matey.

“thoughts are being thought, schemes are being schemed and plans are being planned.”
This of course sounds like a perfect recipe for wargames butterfly inspired MDF wonders.

Take it easy old chap… the mojo will return.

Aside from a general lack of enthusiasm - as much to do with a lack of time as much as anything else (work is being particularly trying) - I would say I am more distracted than anything else. My chin has not dropped to the floor as such but is flapping in the breeze somewhat!

I know the full on mojo will return at some point and MDF marvels will follow - so watch this space and the butterfly….

Thank you old chap. I have been known to come up with the odd phrase now and then so am flattered to be in such lofty company! I seem to recall something similar in Dune - wheels within wheels perhaps?

Shades of the Steve McQueen classic - The Thomas Crown Affair and the Windmills of your mind….

Fingers crossed your mojo returns soon and then we can find out what you've been musing on whilst dealing with life's trials and tribulations. Chez moi I am juggling many balls too, which can be a challenge at times, but c'est la vie!

Sad to hear you've lost the spark as I am finding mine, specifically for Naval. I've admired your blog from a far for some time now and had a question or two in regards to Naval Wargaming.

Would love to pick your brain sometime via email if that would suit when things are a bit less trying.

All the best and I hope things begin to look up!

The mojo is on a gentle simmer at present but I will turn the gas up at some point!

Happy to help if I can - drop me an email on drcrook@btinternet.com.

I have taken a fresh look at my ACW ships and hope to resume work on them at the weekend - assuming nothing else untoward happens!

Sorry I missed this when you posted and I hope things are looking up for you all very soon. Now I'm up in London a bit more during the week we should do beers :)

Sorry to hear that things are rough at the moment as the saying goes ’This too shall pass’. Stay positive as best you can.

The odd life event is normal but three at once is rather over egging the pudding, as they say!

We bend with the breeze but always straighten up eventually....

Many thanks old chao and stay well.

Just seen stuff about your travails & wanted to wish you all the best. Gotta strange feeling things will turn around somewhat, & in something of a rush too...Hang on in there,

Thank you most kindly! I always think that half the battle is understanding a problem because in doing so you take some of the sting out of it.

Nil Desperandum and all that!