The Joy of Genealogy 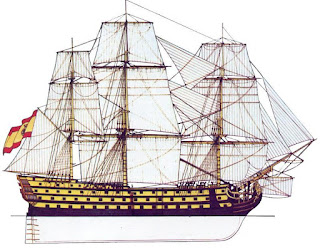 The San Josef in Spanish service

I have posted previously about my grandfather and his service in the Royal Navy from 1919 to 1945 some time ago - you can read about this here. Staying with the naval theme I was quite surprised to find out that a previous generation of my family also served at sea - during the Napoleonic Wars in fact.

A cousin of mine has been working on the family tree on my father’s side and it appears that Thomas Crook (baptised 1782 from the village of Berry Pomeroy in Devon) served aboard H.M.S. San Josef - a 114 gun Spanish first rate captured at the battle of St Vincent and later the flagship of Sir Thomas Duckworth. I do not have any details of the extent of his service and given that in all probability he was a farm labourer I cannot help but wonder if he was ‘pressed’ into service. I would certainly like to find out more about him.

So it seems like my family on my father’s side originated in the West Country but headed east during the course of the 19th century - presumably to find work. Thomas’s son George (b. 1834) married in Erith, Kent in 1861 and after a brief sojourn in Prittlewell, Essex (according the 1881 census) were, by 1890 running the The Plough - a public house in Chelmsford. One of his sons, Lewis, moved to Walthamstow where my grandfather, Alfred, was born in 1901.

There are a number of coincidences in all this. For a short while I lived in Belvedere which is just up the road from Erith and I currently live quite close to Prittlewell and am not that far away from the Plough in Chelmsford. Small world isn’t it?

It would appear that the Crook Apple does not fall far from the tree!

Fantastic stuff David…
We have only got as far back as the 1830’s…I have the Crimean War connection but I am however hoping for a Napoleonic one as well.

Ninety years before my birth, the 'Waitara Purchase' as it became known became a a 'casus belli' between local Maori and the Colonial government, that led to war. The British 65th Regiment of Foot was called in. Probably THE major action in this war was the (attempted) assault by some 350 men upon Maori fortifications as Puke ta Kauere, close by where the modern town stands today. The attack was repulsed with some 20% casualties.

Years ago I discovered that a certain Lt Dowman served in 65th Regiment. The officers were listed in the 'Lyttelton Times' shortly after the action. Not a direct ancestor, but he would have been some kind of great grand-uncle, I suspect. Thirteen years later my great-grandfather landed with his family at Lyttelton Harbour. Some of his sons (including my grandfather) migrated to Taranaki and settled upon confiscated lands south of Waitara.

Its a strange world, Dave!

I hope not! Joking aside I cannot imagine that my Napoleonic relative was an officer of any kind but it would be fascinating to find out exactly what he did do - should the records exist.

A lot of the trail belonged in the funny coincidences department but the Napoleonic connection was a welcome surprise.

Now that is a tale worth telling - and a great subject for a historical novel!

It is that for sure!

It would be fascinating to find out exactly what he did do but I suspect this may be tricky!