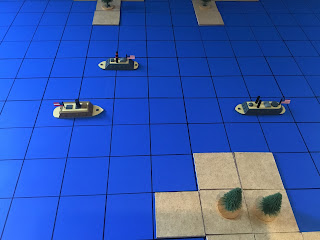 C.S.S. Arkansas engaged by the U.S.S. Carondelet and U.S.S. Essex

I was able to spend some time working on the 3 x 3 Portable Ironclad Wargame and I am very pleased that I did! A lot of the rules from the ‘parent’ set I devised can readily be used as written but there are a few changes necessary in certain areas. Ironically some of the changes I envisage making may well feed back into the parent set.

The biggest single change concerns movement speeds. In the parent set movement rates were calculated on the basis of 2 knots equalling 1 square of movement - bear in mind that models occupy two squares. To fit in a 3 x 3 grid I am using a movement rate of 1, 2 or 3 and furthermore ship models will be occupying a single square. As a rough guide a movement rate of once equals a speed of up to 5 knots or thereabouts, from 6 to 12 knots equals a movement rate of 2 whilst faster ships can move 3. Turns are of 45 degrees (diagonal movement and firing is permitted) and will have a movement cost depending on the type.

I have scrapped entirely the cumbersome critical hit system as although I quite liked it it was a little on the clunky side. Instead I am planning on using the critical damage point as a trigger for a random critical effect. The rationale for this is that when a ship reached its critical point then it could be ablaze, flooding or otherwise inconvenienced somewhat. I have also reintroduced the ‘roll a 6 and get an extra roll’ when tackling firing.

Firing arcs will be a whole lot simpler as models are occupying a single square. Gun Factors determine the number of d6 rolled to hit with 4 and 5 being 1 hit and 6 being 2 hits. The armour value has to be overcome by hits for damage points to be inflicted e.g. armour value 2 will need a minimum of 3 hits to score any damage. If a ship is armed with rifles it will gain an extra d6 regardless of how many it is armed with. Finally, ranges are 2 and 3 squares with the latter being for rifles. The biggest difference from the parent set is probably abandoning the whole armour value versus penetration value mechanic. Firing will now be a whole lot simpler and quicker but will still retain the flavour of the firing ship.

I did not mention it specifically but I am looking at this system for pre dreadnoughts and also for Colonial/Great War gunboat style actions - such as might have been fought on the waterways of the island of Madasahatta….

Needless to say there is a cunning plan afoot.

This looks very interesting, I'm looking forward to the rules in action with a battle reoort.

All being well I shall be fighting over the weekend - I have a scenario in mind - although I have yet to consider the whole flank/reserve angle.

It has proven to be a very interesting project that has given me a real buzz!