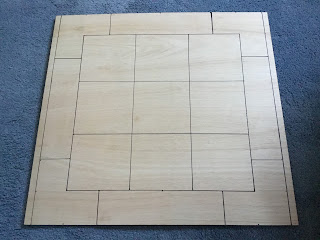 To the untrained eye the above is merely a piece of plywood with some lines drawn on it - members of the Portable Wargame 3 x 3 club will recognise it and nod knowingly as to its true function….

It is rough and ready I know but for experimentation purposes it will be just fine! In any event I can always make something a little more aesthetically pleasing later. I used an odd piece of plywood I had laying around and a trusty Sharpie permanent marker and the overall size of the playing area is 2ft by 2ft - also known as the 15mm sized playing area for DBA and HOTT. Coincidence? Maybe, but I couldn’t possibly comment….

The 3 x 3 central grid is made up of 6” squares and the areas around the edge of it will be usable during a game but only for scenario specific reasons.

The first thing that has struck me about this playing area - and seeing it in the flesh so to speak, has been something of a revelation - is that only a small number of ships would be needed for a game. Now I know that is pretty obvious but I have spent a considerable amount of time pondering how to fit squadrons on a 3 x 3 grid - and for my collection this will not be happening! I reckon three or four at a push models a side would be about it but that actually works really well for me for a variety of reasons.

The ‘variety of reasons’ mentioned in the previous paragraph includes something Madasahatta related - I am looking long and hard at various late 19th century ‘Colonial’ gunboats, mainly for the British and Germans although there are some rather nice looking French types which are definitely tempting. 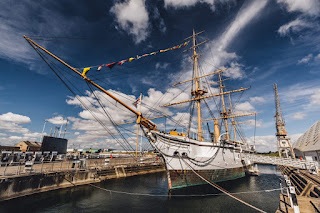 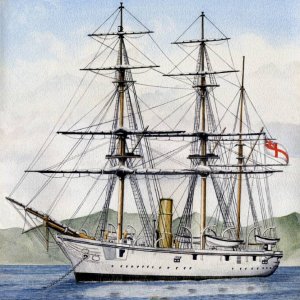 ….and a rather picture of the same in service.

I am also being strangely drawn to making a version of the sloop H.M.S. Gannet - after all, not only is she available to look at in Chatham Historic Dockyard but she was also built in my old hometown of Sheerness on the Isle of Sheppey. The only trouble with this idea is that I know that this would be very much the thin end of the wedge and inevitably a whole gamut of other models to go with it!

The next post will be of the battle I shall be fighting - effectively my somewhat delayed initiation into the brotherhood of 3 x 3 Portable Wargamers - and I have to say I am really looking forward to it.

Hi David -
It is is funny how ideas converge and diverge. I've been looking at thenaval possibilities as well, although perhaps a little more skeptically. BUT I have foung some interesting looking pictures that suggest 'cartoony' ('chibi-Maru) style galleys, dromons and longships (plus some cog transports).

I must admit that 3 x 3 for naval games may be stretching the concept a little too far but for very small numbers of models in an era when combat was fought up close and personal. Anything up to dreadnoughts would work although one would normally expect what are in effect skirmish level games to have skirmish level of detail type rules.

With my current domestic situation small games that do not take up lots of time are definitely my ‘go to’ at present!

‘Cartoony’ style ships work well and Bob Cordery has been using this technique for his models for years and to a lesser extent so have I. I will be keen to see your take on the galleys, dromons and longships!

That make for quite a stylish looking gaming board David….
Maybe you could pimp it up with a bit of marquetry.

You… more model ships….. thin end of the wedge… never 😂

I reckon a little TLC will turn it into something serviceable and I would definitely get plenty of use out of it!

I know, I know…and if I ever Great to the Great Lakes you will be the first to know!