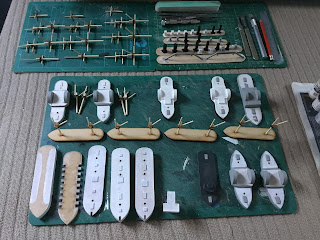 It does not look like a lot of progress but when you consider that the there has been two coats of paint on the funnels, pilot houses, the three right hand models from the top and bottom rows as well as the eight masts being sealed it has been a fairly productive couple of hours. The veritable forest of masts top left are for the frigate (bottom left) and the two sloops.

What a week it has been!  Aside from my birthday and the seismic financial markets wobble I have been able to get a little time in the man cave working on the remaining ships. Now it may not look like much has been achieved when you look at the picture above but it does represent a fair amount of preparation and indeed, something is at least finished. Funnels. All the funnels for the eleven ships you see have been painted. The pilot houses have also been painted with the exception of their roofs. I have also painted the support beams for the C.S.S. Selma. All of this lot will be varnished when finished prior to being fixed to their respective hulls.

The four hull layers you see with masts temporarily in place are merely a convenient way of placing them whilst the paint is drying. These have been sealed and as a rule I do not usually undercoat them so painting will be next.

All of this preparation means that I am now well positioned to finish the first six models and with the next five at an advanced state of construction.