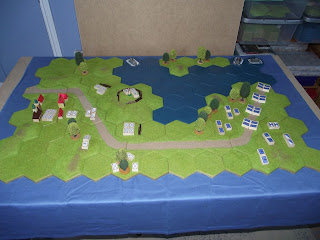 On the banks of Yahoo River - the narrowness of the passable ground can be seen in the lower centre of the picture and Fort Duvet, overlooking Blueberry Bend, guards the river in both directions.

The action that follows is typical of that which featured often during the Union campaign to enable the mighty Mississippi River - the 'Great Father of the Waters' - to flow 'unvexed to the sea'. It is not based on any particular battle fought on and along the river although the title may give you a clue, as would the number of the game itself although that was purely coincidental! 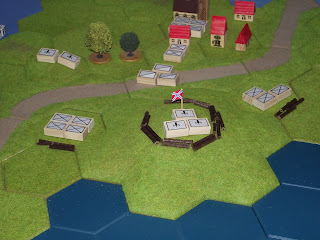 Fort Duvet, overlooking Blueberry Bend with the town of Blocksville in the background.

The Confederates have established a fort on a bluff overlooking Blueberry Bend along the Yahoo River just outside of the town of Blocksville, Tennessee. Thus far the guns have deterred any Union attempts to travel upriver and so a combined naval and land operation has been planned in order to attack and destroy the fort. If successful this will enable the next phase of the Union campaign to take place and will force the Confederates to devote precious resources to prevent any further enemy advances. The Confederates had gotten wind of this plan and had hastily assembled a scratch force to hold the landward approaches to the fort and just to ensure that this particular stretch of the river remains firmly in their control, the armoured ironclad ram Arkansas has been ordered to support the fort and to deter any water borne Union assault.

Unfortunately for the Confederate cause the temperamental nature of the Arkansas's engine meant that she was unable to prevent the Union forces landing some miles downstream of Blueberry Bend. Her engines have now repaired and so she is available for operations against the Yankee invaders. 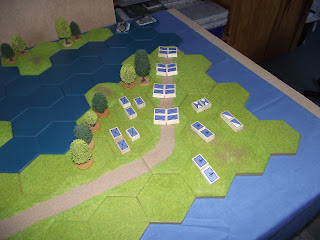 The approaching Union forces - note the U.S.S. Carondelet and the U.S.S. Essex at the top of the picture.

2 x 3 block light infantry (massed skirmishers from the above)

42 strength points in total - Exhaustion level 16 with 8 points required on either line infantry or the gunboats.

1 x 3 block light infantry (massed skirmishers from the above)

1 x 3 block artillery battery (rifled heavy artillery) - Note: these guns may not be moved and may only fire at targets on the river.

The fort guns may not fire at any vessels in the hexes adjacent to the bluff; similarly no warships may engage the fort from the same position. This is due to the limited depression of the fortress guns and the limited elevation of the warships guns.

30 strength points in total - Exhaustion level 14 with 7 points required from the line infantry.


The terrain around Fort Duvet is mostly low lying and is prone to seasonal flooding which renders much of the local area impassable to large bodies of troops. As a result of this any high ground becomes highly desirable as pretty much everything else is unsuitable for building on or trying to defend. A belt of higher ground follows the course of the Yahoo river from about ten miles downstream and finishes some five miles further up and has a rough track used for land based communications and travel. For this reason the area could be easily defended with a relatively small number of troops as the terrain tends to funnel and movement along the shores of the river. Unfortunately for the Confederates the Union forces are systematically working their way along the river and a succession of Rebel strong points have fallen to the combined river and land assaults of the Yankees. 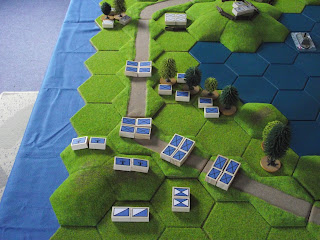 The Union are forced to attack on a very narrow frontage and are mindful to ensure that sufficient space exists in order to deploy fully. Note the skirmishers moving into the tree line 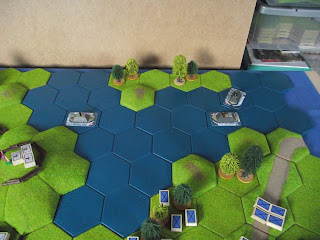 As the infantry prepare to engage so to do the warships of either side. The C.S.S. Arkansas prepares to challenge the U.S.S. Carondelet and the U.S.S. Essex whilst the guns of Fort Duvet make ready. 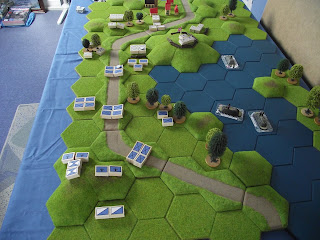 The lead Union infantry regiment comes under artillery fire whilst their skirmishers engage the Rebels in their fieldworks. Meanwhile the C.S.S. Arkansas takes a telling hit from the U.S.S. Carondelet. 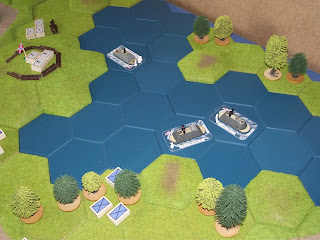 The guns of Fort Duvet batter the U.S.S. Carondelet as she runs for the shoreline and safety. 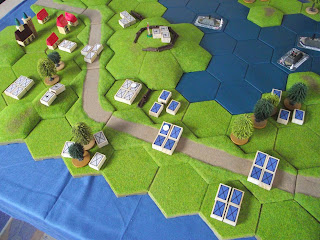 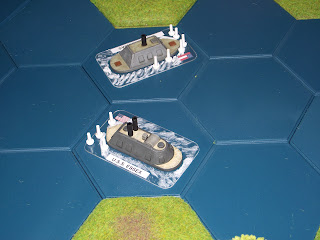 Meanwhile, the C.S.S. Arkansas engages the U.S.S. Essex at point blank range and inflicts severe damage and not to be outdone, the Union vessel retaliates and sinks the Rebel ship! 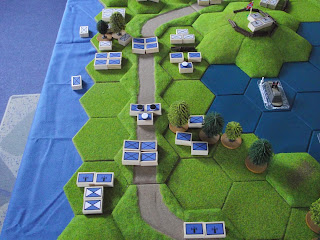 The Union forces continue to press the stubborn Rebels but see the leading decimated by artillery (black) and musket (white) fire. Two regiments have reached the the woods occupied by the Rebel skirmishers but help is at hand. 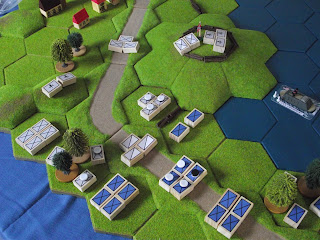 With reckless gallantry the cavaliers of the old South charge the leading Union regiment already wavering under artillery fire and cut the disorganised survivors down. Meanwhile, the Union skirmishers have charged back into the fray and, inspired by the sinking of the Arkansas, defeat the Rebels holding the fieldworks. 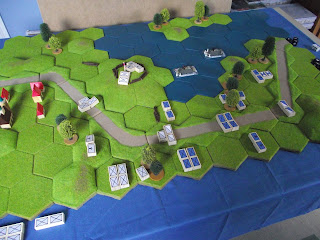 The beginning of the end as the Confederates near their exhaustion level and the weight of Union numbers begins to tell. General Gaylord Beauregard Hastings III moves into the fort to oversee the heavy artillery fire - which has thus far been fairly ineffective 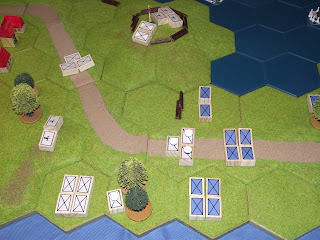 The Confederate horseman, despite their heroic efforts, succumb to the weight of fire from the Union soldiers whilst the woods are cleared of Rebel infantry. The Confederates have been defeated but with the last throw of dice from the guns of Fort Duvet under the eyes of their gallant commander..... 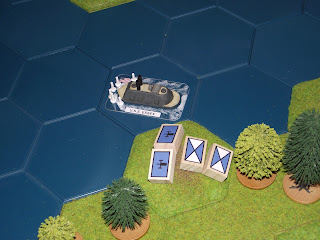 Phew! That was a game and a half and no mistake. Once again I used Bob Cordery's Memoir of Battle rules and they worked extremely well for what was a fairly complex scenario. I have been itching to try the Hexon with a river based action and to also use the ACW scratch builds with the blocks and the end result looks pretty good in my opinion. It does mean though that I will simply have to finish the other 32 models I have built for the respective navies and really tackle some river based campaign action.

The rules worked really well and the ship part will need minimal work to make them usable as either support for land actions or as a set of naval rules in their own right. This will also mean that I will inevitably need to look at MoBaS again - but not just yet though as I am having far too much fun with the block armies as they are!

A rip-roaring battle report! The ships look very good alongside the block armies ... and I love the new Grey Confederate blocks.

I am extremely please that the rules work so well, and that MOB do not need many changes m even when ships are used.

I look forward to reading more ACW battle reports over the coming months ... and seeing all the ironclads finished.

PS. The fortifications looked exactly right for the period.

Nice table and very nice to see the ironclads on table. I like the splash markers -did you raid a mastermind game?

Love the idea of these block armies. I really thought the appearance of blocks in Napoleon at Marengo was impressive but these blocks and Hexon take it to a different level. Really enjoy your battle reports... Thanks.

Many thanks for the kind comments. The rules work really well and the naval dimension was of a sufficient level of interest to provide a nice representation. I reckon that they could be tweaked very slightly to add a further level of detail that would sit nicely with the land rules and no surprises in that I am already giving it some thought! Also finishing the other models!

The fieldworks are made from old style fibre rawl plugs and I shall make glue some together for some more serviceable versions (and size them to the edges of a Hexon tile).

Looks like the ACW river campaign will be get some attention after all!

Thanks old chap! Guilty as charged re the Mastermind markers. They look really good with 1/3000th or smaller models as well.

I was really chuffed with the way the game worked out and plan to get back to the ACW river campaign with a vengeance.

Many thanks for the generous comments - much appreciated. I am really pleased that the idea has seemed to come together so well and it certainly gives me more than sufficient material to represent just about any army from the period 1700 to around the Great War just from what I have ready thus far. I need to redo the labels for the vehicles and 20th century kit - MGs, mortars, vehicles etc which will then cover me up to the present day potentially.

I enjoy writing the battle reports and that is a much a part of the fun as fighting them in the first place!

It's a beautiful looking game.

Many thanks old chap! I am really pleased with the Hexon stuff and as soon as I am back in work the plans are in place to acquire some more of it!

You've done a wonderful job with the terrain arrangement. The reporting was a joy to read. Looking forward to more in the future.
Thank you.
Don

Many thanks for the kind words and trust me - it was a real pleasure to set up, fight and write about afterwards!

I fully intend carrying this on and have many ideas for other ACW actions and also for other periods so watch this space!

I guess one could say that Fort Duvet had the River bed well covered. At least until this attack. I've just been reading Sherman's memoirs which made this battle report timely as well as a pleasure to read.

Blocks and ACW ships it all makes sense to me now :)

Thats a relief! The combo looks pretty effective IMHO and certainly means the rest of the ship collection will now have to be finished.

Obviously for the Confederates the blanket approach to river defence was not enough....;-)

It was tremendous fun to game and has given my ACW river 'itch' a big scratch will will now need some regular attention.

First the models though....