Earning a Ritterkreuz over England....Game Number 8

Following on from the recent 'Angels 20' game based around the air combat typical of the Battle of Britain I decided (again on the spur of a moment) to revisit the same but with some extra aircraft. If you recall the last game I reported on utilised all the models in a basic starter set - a brace of Bf 109, a brace of Hurricanes, a Spitfire and a BF 110. Since then my planned second copy has arrived and so I increased the match up to four aircraft a side as well tinkering slightly with the initial set up. I wanted to do this mainly because I wanted to have a split scenario whereby a pair of BF 110 escorted by by a pair of Bf 109 as top cover were mixing it with a brace of Hurricanes in turn with the Spitfires acting as their top cover. Essentially this is my interpretation of the 'Hurricanes-going-for-the-bombers-whilst-the Spitfires-engage-the-fighters' scenario typical of the air battles over Southern England during summer, 1940. 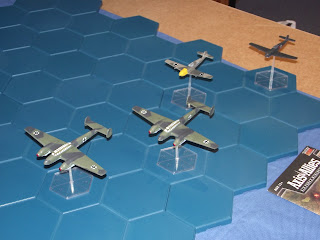 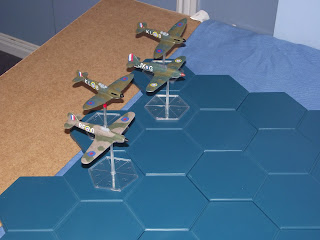 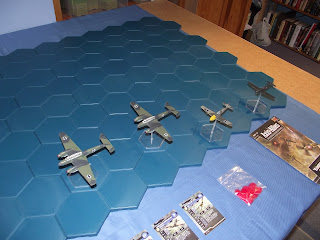 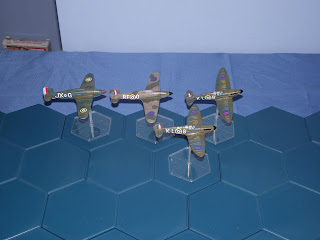 With Spitfires racing to the fore the Hurricanes prepare to engage 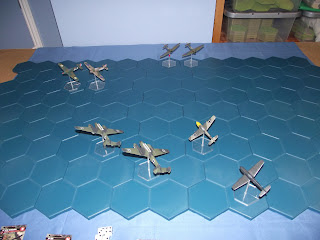 With one eye on the escort the Spitfires turn in to the attack whilst the Hurricanes attempt to engage the Bf 110s. The Bf 109s lurk menacingly, and again, with an eye on the dreaded Spitfires 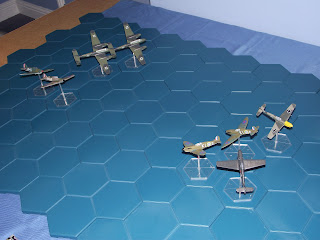 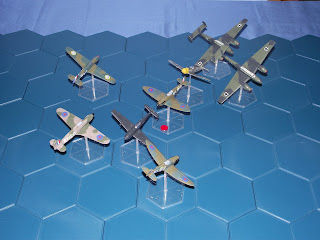 The two fights rapidly became entangled as the Hurricanes gamely attempted to tackle the Bf 110s whilst the  109s mix it with the Spitfires. Furious amounts of gunfire yield but a single hit on one of the Spitfires 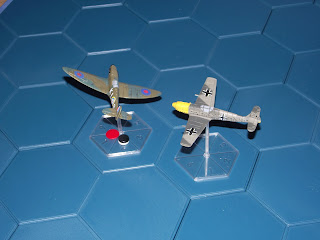 A Spitfire in real trouble - further damage and a relentless pursuer 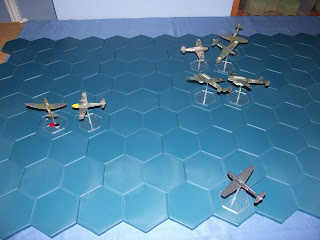 An overview of the action (dare I say, a bird's eye view) with a solitary Spitfire separated from his wingman and dire straits whilst the Hurricanes continue to harry the Bf 110s. 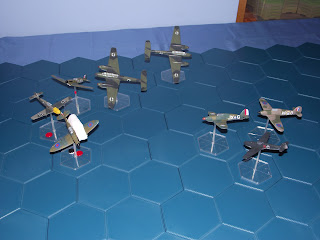 The crippled Spitfire tries a diving turn to shake his assailant but to no avail as the Bf 109 matches his every move and administers the coup de grace. In doing so the remaining Spitfire opens fire and damages the German fighter. Note the Bf 109 engaging the lead Hurricane and the Bf 110 opening fire at point blank range against the Spitfire - and misses completely 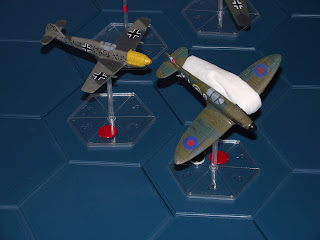 The end of the Spitfire 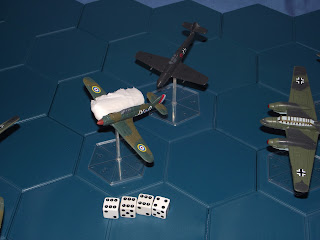 The spectacular end of the first Hurricane under the guns of the Bf 109 - much to the chagrin of the Bf 110 who was slower on the draw! 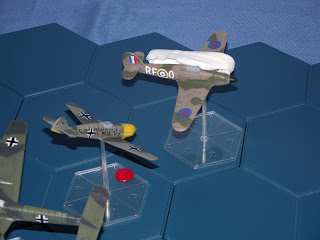 After downing the crippled Spitfire the German fighter roared around in a tight turn between the mass of whirling aircraft, diving as it went, to blow the second Hurricane out of the sky

At this point the sole surviving Spitfire dived away and the German aircraft resumed their mission, buoyed up by their success thus far.

Apologies for the picture heavy and text light approach with this post but the game was very much a spur of the moment thing and so I did not really give the preparation much thought. I usually like to give the scenario back story a lot of consideration beforehand but not this time! Actually it was quite liberating in a way but rest assured, normal service will be resumed with the next game I undertake!

Incidentally, I used all of my blue Hexon tiles (the 21 you get in a box set) on my new 6ft by 4ft gaming table    and made the welcome discovery that in order to cover the table I will not have to buy a full box - in fact I would only need another 11 tiles which will translate into an area equal to 12 by 16 hexes. I will also need to add some additional terrain pieces but not too many - probably just some extra road and river sections and perhaps a few hills.

All in all then, it was a good game and the new table has been officially christened. I have also managed to play 8 games at home and so my plan to fight at least two games a month is back on schedule - albeit only just!

Quite a nice report. Enjoyed seeing the new table in use, it looks big in the photos.

It is funny but when I measured out the area the table would occupy I thought it would be too large hence the need to hinge it so it could be folded away. Now that it is place it does not seem so large so may well stay up permanently - or at least until I get some handles fitted as it is quite unwieldy.

The game was good fun but I am unconvinced that Hurricanes were as bad as the game makes them out to be!

How are the skies over your way?

I will now have to do something with Bag the Hun for some more period specific flavour!

You have not heard the last of 'Chips' Ramsden, Walter Mainz and Hugo Furst....;-)

The best way I can describe the German performance thus far is efficient - basically they had a plan and stuck to it whereas the RAF acted very much in a Boy's Own gung ho fashion!