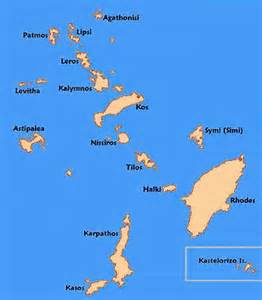 The Dodecanese Islands - despite the name there in fact more than 12 of them!

It is no secret that I am very fond of the Eastern Mediterranean as a holiday destination. Aside from three visits to Turkey I have also visited a number of Greek Islands  and have no doubt that I shall do so again.  I have often pondered over the possibility of the wargaming uses of the islands as they have been fought over many time during the centuries. My recent reading of Churchill's Folly - Leros and the Aegean by Anthony Rogers (ISBN 0 304 36655 2) has been very inspiring for a number of different reasons and so I have once again been giving some thought as to how some games could be organised set in the area.

The plan for the Allied invasion of the Dodecanese Islands following the Italian surrender was simple and, to quote Churchill himself, "This is a time to play high. Improvise and dare." It was under resourced and hastily improvised as Allied attention was focused towards Italy. The Allies had to make do with what was available for the most part although special forces in the shape of the SBS and the LRDG were involved as well as regulars. The Germans reacted swiftly whilst the allies were bickering about priorities and achieved a major coup in occupying Rhodes - the largest island in the chain. Once this was achieved the Allies were pretty much always on the back foot and the Germans were able to secure local air superiority which went some way to negating Allied naval superiority.

The Germans threw in paratroopers, fortress troops and elements of the famous Brandenburg division as well as fighters (mainly Bf 109 Gs) Stukas, Ju 88s and He 111s - as well as glider bomb carrying Do 217s. The Allies responded with a smattering of South African Spitfires, Beaufighters, Hudsons, Wellingtons, B25s and the occasional sweep from P38s.

Alistair Maclean used the campaign as the backdrop for his novel 'The Guns of Navarone'  and observes that the importance of Turkish political opinion in the area could not be underestimated and so the Germans were relatively lavish in the resources they used to secure the island chain.

This would not be a campaign of sweeping armoured thrusts with divisions of tanks and all the strategic considerations of the war in Europe - this was a war of infantry and small ships and so would be ideal to recreate on the tabletop.

Of course Turkey was neutral during the war but the tantalising possibility of using the Allies aided by Italians fighting Germans aided by Turks would make for an interesting match up - especially as in 1943 the Germans were actively courting the Turks and were supplying them with FW190 fighters and Panzer 3 tanks. Technically the islands of the Dodecanese were under Italian control as a result of the war against Turkey in 1912 so assuming that Turkey throws in its lot with Germany following the Italian capitulation you have a rather interesting situation. The Allies would have to assign more resources to the area on the back of this new threat and so the potential, the famous 'what if?' so beloved in wargaming circles, for some fascinating actions is huge.

The current Mrs Steve the Wargamer and I had our honeymoon on Lipsi.... utterly blissful place.... we had 3 weeks of doing absolutely nothing but eating sleeping reading and errrrr.... less said.... :o))

Although it will not feature this year I am confident we will be renewing our acquaintance with the Greek islands in the future. One of my enduring images was on one occasion looking out at the sea and being unable to tell where the blue of the sea ended and that of the sky began.... (Lindos on the island of Rhodes).