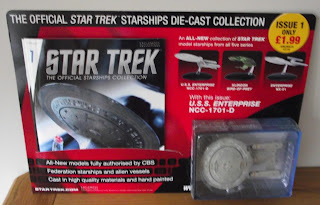 The first issue at a discounted price of £1.99 with the normal price being £5.99

Today has been unbelievably wet! the rain has been non-stop and monsoon-like and I doubt very much if any of our usual boot sales will be open tomorrow and fields being underwater is a distinct possibility! In fact, we now have a couple of inches of water in our garage, the fire brigade have been called and the front drive resembles a fast-flowing stream. Our next door neighbours front garden is slightly lower than ours so the water from our drive has been cascading down on to their front garden. There is much footage on Facebook of the roads around where we live being under gallons of the stuff - even of some intrepid souls in canoes!

Despite the rain, SWMBO and I needed to get in the weekly shopping this morning so a quick trip to the supermarket was called for. Whilst queuing up to pay for the shopping I noticed the rather impressive looking model featured above and promptly purchased it!

I am a Star Trek fan of long standing and about ten years ago had a large collection of the Micro machines models (now owned by the club) which saw much action on the final frontier. We used a Star Trek specific variant of Full Thrust by Ground Zero Games and had a lot of fun doing so. 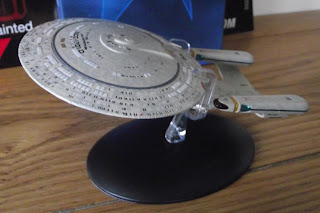 The Enterprise D out of the packaging

The Enterprise D first appeared in Star Trek: The Next Generation and the model is really nice. The finish is outstanding in terms of detail and measures a whopping 5 1/2" long with the saucer section being some 4" across. The exciting thing about this model for me is that it is actually rather more in scale with some of the Micro machines models - although this new range will have the same problem - the models are scaled to fit the packaging. I have no intention of collecting the entire series but may well dip into a couple of selected models along the way. Perhaps a trio of Klingon cruisers, Enterprise and Reliant from The Wrath of Khan and possibly a Bird of Prey may feature at some point.

The great thing about acquiring some of these models is that I would not need to spend any time painting them - which means the games can take place rather more quickly.

Am I talking myself into another project - or am I revisiting an old one?

My husband built that model ages ago and it sits on his desk no matter where we move to.

Not a fan of Star Trek I enjoy watching them now and again but thats it they are lovely diecast vehicles though! Fingers crossed the rain stops for you!

Your husband is a man of impeccable good taste - not only because of the Star Trek model but also because he had the good sense to be your husband!

It does look a cracking models and the detailing is top drawer.

The rain has stopped and the sun is out and much of the water has now drained off but it was very unpleasant whilst it was happening.

Aside from our garage being under an inch or so of water we escaped unscathed. Many people close by were less fortunate though.

Fantastic bargain. While I prefer the 60's Enterprise that is still a great model.

The 60's Enterprise will feature in the range but the next model is the cinema version from the Motion Picture and later. I want to get this - and the USS Reliant in due course.