A Rather Neat and Inspiring Title 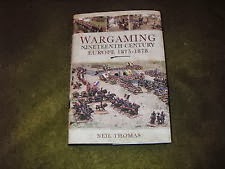 Something for the train - and possibly the weekend!

I must confess to have been considering acquiring the above title for some time and earlier this week - by virtue of eBay - managed to do just that!

I was pleasantly surprised by the scope of the content of the book mainly because it seemed to be so well laid out. You have an overview of the period, a suggested set of rules (which have 'use then with the blocks!' written all over them - as Mr. Hardman and others have pointed out), a set of army lists - useful for reference - and a number of historical scenarios spanning the era.

The rules look quite interesting and would be eminently suitable for use with the blocks as they are base driven.

Coming as this does on the back of my recent acquisition of the book on the Swiss Civil War of 1847 (Three Weeks in November by Ralph Weaver) I now have even less excuse for not attempting a game from this period of history!

In closing the pictures are top drawer and very inspiring and cover some surprising topics (the Carlist War or even the war of 1864 with Denmark anyone?). My only observation is that it would have been nice to have seen a game from the Russo-Turkish War of 1877 but then that is just me!
Posted by David Crook at 06:24

Weird. I should be receiving this from the library in the next day or two.

I liked his book so much that I have bought it in both printed and kindle versions. Lots of good ideas and scenarios. I am sure that you will enjoy it.

I have this book to as well as his Napoleonic and Ancient/Medieval ones.

I would hope to make use of these rules with the Crimean collection that I look after.

Excellent set of rules... they play very well, but I also enjoyed the lengthy history/theorising that he provides too.

A great read it is and most inspirational- destined to be a classic...
Ideal for some Swiss gaming I think.

You will not be disappointed!

I am very impressed with the whole book and think the rules may solve a number of dilemmas I am having - especially when I 'hex' them!

Needless to say I have a number of ideas around using them - in fact I wonder if using them for the ACW may not be a bad idea!

They appear to have a certain style and if they play as well as they read then I shall not complain! I enjoyed the historical section as well and although I am not knowledgeable about the period as a whole what was written seemed to make a lot of sense.

They appear to have a certain style and if they play as well as they read then I shall not complain! I enjoyed the historical section as well and although I am not knowledgeable about the period as a whole what was written seemed to make a lot of sense.

I think you will certainly enjoy it!