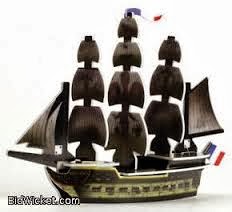 This is an example of the models I have acquired - GHQ or Rod Langton they are not but they are ready to use and look great en masse!

I made a flying visit to the club on Wednesday to be greeted on arrival by a table groaning under the weight of a huge collection of gaming related stuff being disposed of to make way for the impending arrival of a first child. I was speechless, nay gobsmacked! Mr Fox duly made a note in his diary at this historic event....

There was a lot of good stuff on display including more 20mm WW2 tanks and figures than you could shake a very large stick at, unmade kits, board games and much more besides. A lot of the things I would have made a beeline for has already been snapped up but I came away with a copy of Rapid Fire plus seven supplements, a bag of unopened Battlefleet Gothic Ork and Chaos spaceships and a huge selection of ships from the sadly defunct Pirates of the Spanish Main collectible model game by Wizkids.

I must confess to never having played this game when it was fashionable BUT, as you have probably guessed, I have a rather cunning plan for what I will be using the 104 models that I now own. The models themselves are quite nice to look at and whilst the scales are somewhat variable they certainly look effective enough on the tabletop. They will offend the naval purist but to be honest, this is probably the only way I will ever get to game anything 'wind and water' related.

I am thinking that there would be some mileage in using the selection of models I have for some species of a mini campaign set in South East Asia during the latter part of the 18th century. The nationalities represented are the French, the Spanish, the British, the Americans, the Chinese, the Pirates and even the Barbary Corsairs. 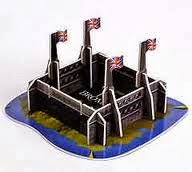 I have a rather natty set of rules to use with these models and the entire project will be neolithic in its simplicity. I should point out that the idea with this is not entirely original as a similar idea formed the basis for Eric Knowles's WW1 naval campaign set in the general area.

Luckily for me the only effort I will need to expend is very much cerebral in nature - writing 'stuff' and designing maps etc. The rules I want to use can be readily adapted to hexes which in turn will make the map part so much easier to design.

Besides, I need another project to deal with don't I?
Posted by David Crook at 17:58

I have two big boxes of these two - not a bad game actually!

I always thought the ships would work well with Warhammer historical's Trafalgar rules, and the forts would make excellent Aeronef bombing targets!

I loved the pirate ship models. I have played many a game of Kiss Me Hardy with them. Were cheap and I did not have to paint them. A win-win for me.

They look good.Simple but effective! Yes another project, a good way to punish oneself with hobby madness> good to see you haven't lost your enthusiasm...Jeff

I like the look of the fort ship.Another project ,why not I say.BTW is this the same Eric Knowles from the Antiques Roadshow or a name sake?Or does everyone ask this ?

I am quite taken with them for a number of reasons so I suspect some EBay-fu may be on the cards to acquire some more!

Exactly why they are so attractive for me at present due to lack of time for anything else. Intersted in the rules you mention I will drop you a line seperately

The only thing I have lost at present is time!

No - this is another Eric Knowles - he of Madasahatta fame.

They are quite a neat idea and so I hope to get a lot of use out of them.