Tanks for the memory....

The 40mm Fezia and Rusland 1930s collection has just gained some armour! I have been pondering about how best to model some tanks for both sides in 40mm and was more or less resigned to scratch building some suitably generic looking vehicles. The main problem I was trying to avoid was one of table footprint. Any vehicles for this project need to fit on a Hexon tile which is 4" across the flat sides. Any vehicles would also need to be proportionally taller so that the figures looked right alongside. Bob Cordery mentioned a while ago that he had seen some tanks in a local pound shop so I made a mental note to scour these at the earliest opportunity. Up until now I had been unsuccessful but today that all changed. 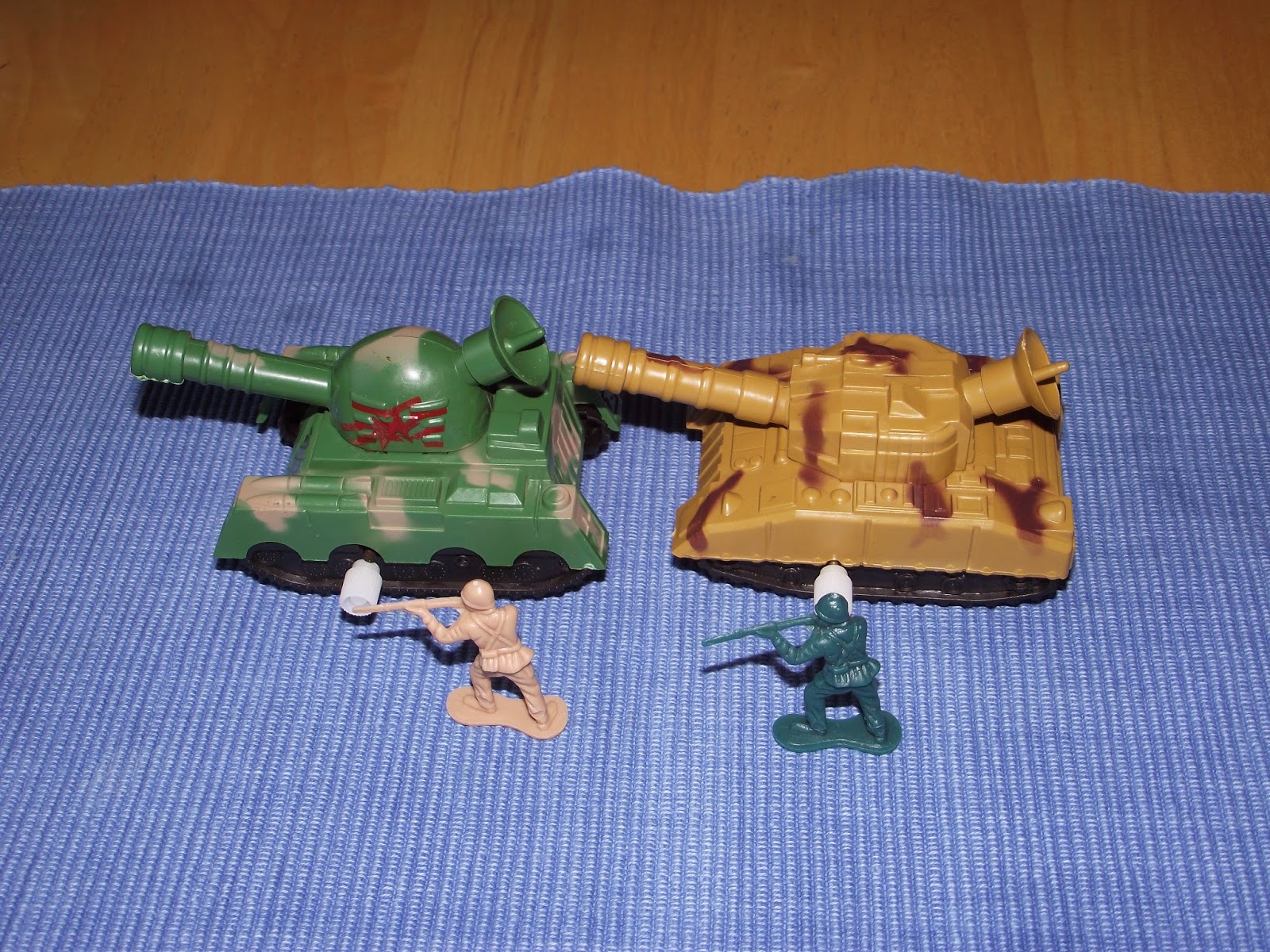 By no stretch of the imagination would I use these as they are but as the raw material to create something unique and more in keeping with how I visualise the tanks of the period looking they are ideal. You get two of the above for 99p and despite the almost Games Workshop Warhammer 40K look they are rather cleverly put together. the track sections detach and the white knob you can see protruding from the side is to wind up the motor. Needles to say that will be removed and so I took one to pieces. The engine has two rather nice wheels that are ideal for use on artillery gun carriages which is an added bonus (and saves me having to buy them!). The turrets are fixed and the strange radar dish at the rear comes off, as does the muzzle brake. I will certainly lose the gun barrel and will replaced it with something a little more reasonable in terms of calibre. The two figures are alongside so you can get an idea of the scale. All in all not bad for 99p - so I purchased four packs and immediately wished I had gotten six instead! 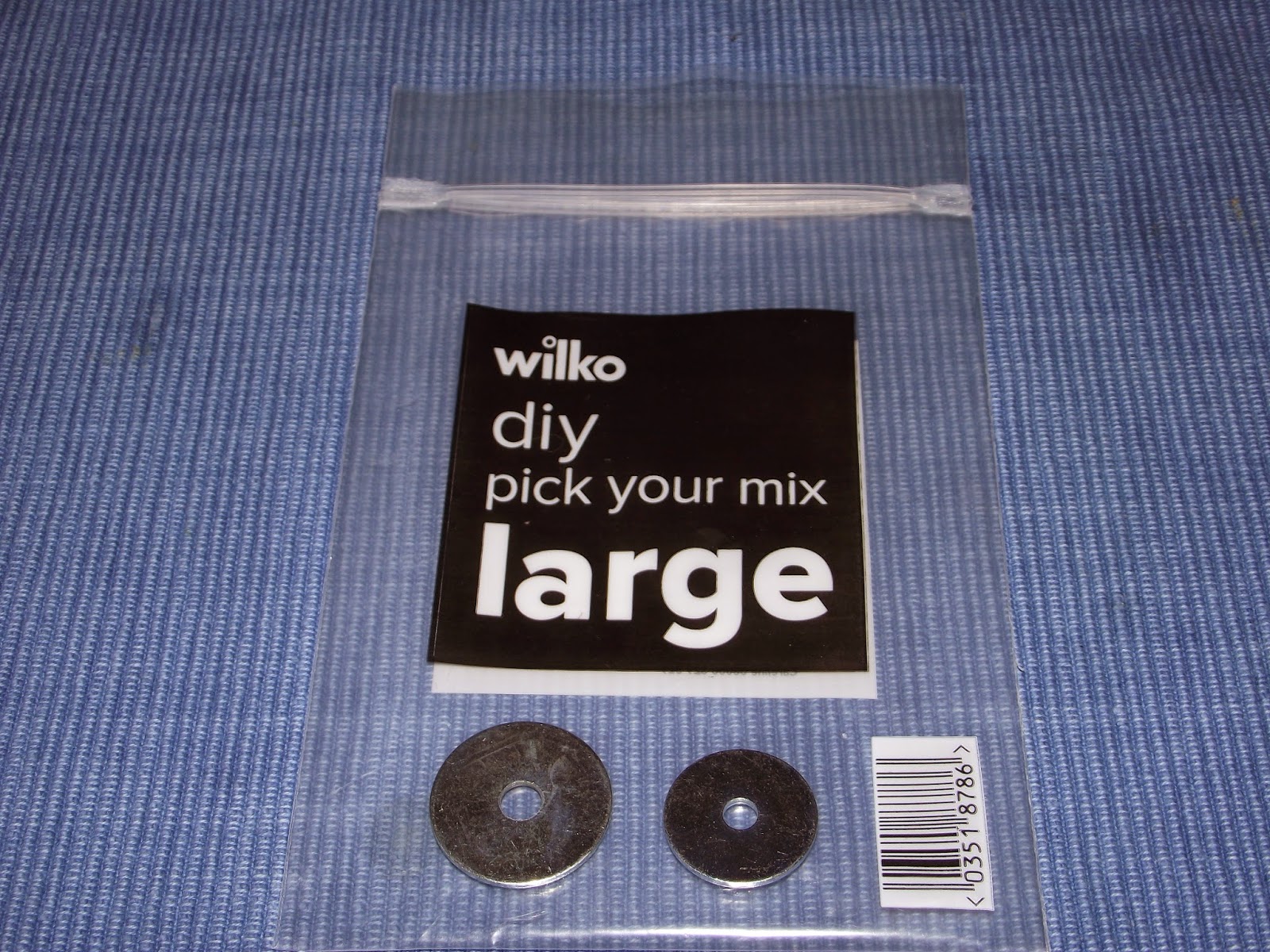 The next purchase was a little beauty! Wilkinsons are now operating a 'pick and mix' in their hardware section for nuts, bolts, screws, nails and washers. A small bag is £1.99 and the large is £2.99. In the past I have never used washers for figures - usually because the washers tended to be dearer than the equivalent use of a 1p or a 2p coin. In the above deal I was able to fill a large £2.99 bag with 166 30mm washers and 147 25mm washers which works out at less than a penny a go. They are also magnetic. The larger of the two sizes were used this afternoon to rebase the 50 odd 40mm figures I am working on - it was a darned sight easier than clipping and filing the 30mm plastic square bases they were originally mounted on I can tell you!

I am now back on course to get he 50 figures undercoated this weekend so that the painting can begin in earnest. I shall also spend some time looking at tanks - which is never a great hardship!

What an excellent set of purchases!

The tanks will be an ideal starting point for your Fezian and Rusland armour. It shouldn't be too difficult to replace the existing gun barrels with suitable plastic tubing.

The tanks will need a little work and a repaint but as raw material they tick all the boxes. I will need to research 1930s tanks for inspiration but I have a few ideas to play around with. The wheels were an added bonus and I have sufficient to construct 8 artillery pieces so that will be another box ticked!

I like those tanks! So much so, that I would simply use them 'as is' even for 1935. Given the size of the gun barrels I would make them dual purpose - anti-tank and anti-personnel.

I have one 'cartooned' tank in my Army of Kiivar with a similarly fat barrel. It actually shoots water (a water pistol). I've made it a close support tank, unmodified, with a powerful HE effect, but weak anti-tank.

Those radar thingies on the backs of the turrets might form a rudimentary method of inter-vehicle communication: by megaphone. I wonder why it was never tried...? :-)

Some quality armour there sir! I can probably use some of the radar dishes if you decide they are surplus....

I have been giving some thought to what to do with the tanks and I am thinking that something modelled on the idea of an AT and a CS variant may be an idea. I will not be using the barrels though!

As they are I reackon the Warhammer 40K fraternity could find a use for them.

The radar dishes will be going to a new home - at least some of them will.

I reckon I can spare a few of them so will put then to one side for you.

They dismantle quite well and I think that painting will be a breeze.