Messing about on the River (or Lake)

That very talented chap David Manley has gone and done it again. The latest additions to his growing range of naval war games rules are covering a subject very dear to me - that of gunboat operations, both as naval engagements in their own right or in support of land operations. 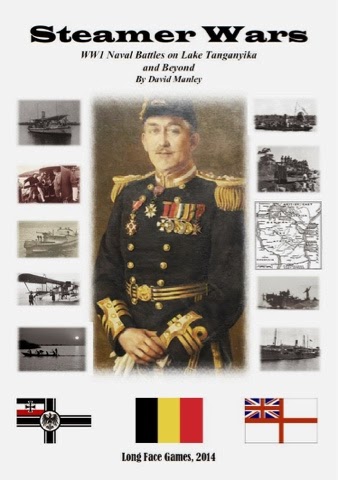 Steamer Wars are designed with the naval battles that took place of Lake Tanganyika during the Great War in mind but are readily usable for just about any similar sized operations set during the period 1910 to 1920. These are not the great clashes between dreadnoughts, rather they are small scale, almost low key affairs that occasionally use purpose built vessels (usually where the power in question has an established presence) but more often than not using civilian craft pressed into service with a couple of guns hastily added. David has included in the rules not only a rather good campaign system for those wishing to refight the campaign but also some more generic ship statistics so designing your own scenarios is readily catered for. As an extra bonus the rules also include the presentation given by Commander Spicer-Simpson in 1934 which makes for an interesting read, albeit a trifle biased!


I am not about to give a detailed overview of the rules as they are available readily enough (and cheaply enough!) from the Wargames Vault. You will also find River Wars which is a supplement to the main rules covering operations on the Danube - and seeing the Austrian Danube monitors in action I defy anyone with a taste for the 'odd' not to be impressed! - and includes ship stats and rules for land based troops, mines, booms, cables and torpedo attacks.


I am working on adapting these rules for use on a hexed playing area - simply so I can tie the action in with my own land based ideas. I do not have any plans to tackle Lake Tanganyika, fascinating as it would be, but the rules have given me a number of ideas for Fezia and Rusland. My plan is to have the border between the two nations separated by a river sourced from a lake - and this is solely so I can have some riverine action using gunboats and the like. I want to scratch build some models for this and believe that the numbers I will need are small enough to be cobbled together easily enough.


I am thinking no more than a couple of dozen models all in and this would include unarmed 'targets'. The plans for the first batch are in hand and will be painted using the Victorian style livery - simply because they will look nicer....


It will certainly make a change from messing around with dreadnoughts - more of which in the next post.

I was thinking that these might make an interesting side game for messing about in gunboats on Martian canals...

Now that is a cracking good wheeze! When I met up with that very nice Mr Manley and mentioned the same he merely grinned in a knowing fashion....;-)

Thanks for pointing this out. I've read some (Belgian) accounts of these small skirmishes during WW1, so this might prove to be a nice start to explore these on the gaming table.

The great thing about this scale of operations is the fact that you do not need a large number of models which in turn makes then cheap to organise and very gameable. David has struck a fine balance between detail and playability with his rules and I am very excited about using them.

I am also intrigued about the Belgian accounts as well - could you give me any details please?

So how about a bit of a review here on your blog? Inquiring minds want to know more - do the rules have Gatlings Guns? Hotchkiss revolving cannons? How we can twist the rules to add Aerial rockets or tesla devices? :-)