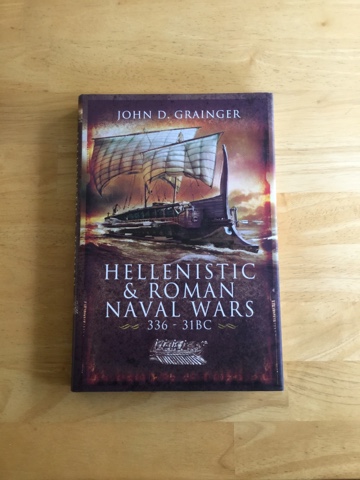 One of those dangerously inspirational tomes.....
Way back in the early 1980s when I first began gaming at the Newham Wargames Club there was a lot of interest in 6mm ancient wargames using WRG 6th edition. There were numerous armies around ranging from Sassanid Persian to Seleucid via late Byzantine and many others besides. There were also armies in 15mm and 25mm (28mm as it became). In fact the first ancient army I owned was a 25mm Carthaginian army with figures from a variety of manufacturers. Under 6th edition it weighed in at nearly 3,500 points and was huge. It was great fun to use although it was a struggle to win with it - I tended to consider having had a good game if I managed to fight the opposition to a standstill! To cut a long story short I abandoned ancients when the 7th edition came along - not due to the rules but at the time a number of things were going on in the real world that derailed my gaming for a while - and only really picked it up after a fashion when DBA appeared. I flirted briefly with the naval side  - as I recall using a set of rules called Diekplus - but not to any great degree.
I must confess to having a soft spot for ancients and with the Carthaginians in particular and I have often considered dabbling once again in the second Punic War. The wars of the Roman Republic from Hannibal up to Mark Anthony's final defeat at Actium in 31 BC have long fascinated me - more so than wars of the later empire - and I have a modest library covering the era to delve into as the mood takes me. The title you see above is one such volume and it is a cracking good read. The naval side of this era was very active and it would not be too difficult to cobble together some forces to game with. I have a selection of galleys that could be used readily enough - if you recall I was toying with something Salamis related a while ago - and as a quick fix it has much to commend it. Ironically there is DBA ancient naval version kicking around the net which would mean even less work to get the forces readied for action.
As far as the land side is concerned the prospect of using Command and Colours with figures is tempting (and Tim Gow of Megablitz and More fame has featured this on his blog on many occasions) but would probably need more figures than I would prefer to acquire. DBA is another story though.
Posted by David Crook at 17:49

I have only read a couple of chapters thus far but it is shaping up very nicely. The thing that struck me though was just how much naval activity in the Mediterranean from Alexander the Great to Actium. It was certainly not one sided by any means.

Yes indeed! My enduring fear is that as soon as I have some gallies in action I will want to do a campaign which of course means land operations and thus procuring soldiers and thus begins yet another slide into insanity...

Interesting post, David. I've always been attracted by the notion of an ancients campaign on land and sea.