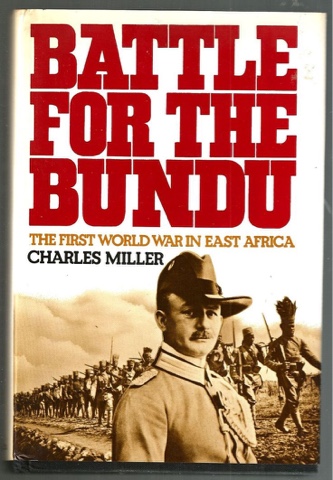 Many years ago, back in the late 1970s, I was privileged to take part in the final phase of Eric Knowles' Madasahatta campaign. Full details of this epic undertaking can be found on Bob Cordery's Colonial Wargames website - including such things as the maps, orders of battle and copies of the campaign newspapers. It was huge fun and for the uninitiated was a 1914 era campaign set on the African island of Madasahatta - loosely based on Madagascar. The armies were a mixture of colonial overseas troops, local levies and the various indigenous tribal types and with a suitably inspiring dramatis personae - you will have to look at Bob's website for more details of this particular facet!
Battle for the Bundu by Charles Miller is the story of the German East African campaign of the Great War under the command of Colonel von Lettow-Vorbeck - which also includes the naval campaign on Lake Tanganyika as well as the Konigsberg affair. After the German cruiser had been sunk her 4.1" guns were salvaged and saw further action under Lettow-Vorbeckand. Let us also not forget the ill-fated dirigible L 59 sent to bring much needed supplies to the German forces.
The Germans were not defeated and remained under arms until after the armistice and Von Lettow-Vorbeck became something of a celebrity to both friend and foe.
I believe that much of this campaign provided Eric with the inspiration for Madasahatta and so I am delighted to have finally gotten hold of a copy - especially as my previous version seems to have disappeared from the face of the earth!
Would I game this campaign? Well I have a very good boardgame based on the East African campaign so the map side would be well taken care of. There are some very nice figures around in a variety of scales but for my money my preference would be for 10mm as Pendraken have a pretty good range for this conflict. In fact, a number of years ago I had planned to do just that with an old gaming friend from SEEMS - my local wargames club.
One for the pending list methinks....
Posted by David Crook at 19:12

This is right up there on my books too, with German Sailors and Askaris fighting The King's African Rifles, Native levies and RN Landing parties. Superb!

That is a rather magnificent hat.

What's not to love is all I can say!

You should take a look at Bob's Colonial Wargames website for the full details of Madasahatta - it was a magnificent affair!

I tried unsuccessfully to fashion my holiday panama hat into a facsimile of the same but did not manage to capture the inherent swagger of the headgear in question.

You should see the Osprey title on German Colonial uniforms for more examples of such attire.

For some reason Feedly did not inform me that you had written this blog entry until today!

I managed to buy a hardback copy of BATTLE FOR THE BUNDU a few years back, and avidly read it from cover-to-cover as soon as I did. After reading your blog entry I think that it is about time that I re-read it!

It is a magnificent read with a huge amount of gaming potential. I am certainly delighted to have a copy once again in the collection although it does mean that I will have to get a couple of other titles for completeness sake for this particulat theatre - and courtesy of Ebay I have been able to do just that and pretty cheaply as well!