Jutland Part 5: The Devil is in the Detail 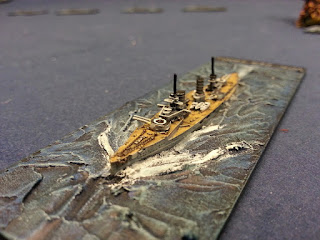 S.M.S. Von Der Tann - the first of the German battle cruisers. This superb looking model is by GHQ in 1/2400th scale from the collection of Ken Reilly and forms part of his Jutland collection. Ken was able to do what I was not able to and built both sides for use in a Jutland refight. His blog details the story of the collection and the action. It was a magnificent effort!


One of the main things I want to achieve with my as yet unnamed naval rules is to have a transparent system for setting up ship damage records. If you recall from my previous posts one of the weaker areas of the original Jutland rules was how the ships damage record cards were set up. They are detailed enough when used within the game itself but not for my needs.


I have tried to reverse engineer the Jutland ship specifications but not with any degree of success. In any event what I want to use is a little more detailed. Calculating the specifications for any given ship is something that most naval wargamers will be familiar with, even if their favourite set of rules had plenty of types included. There is inevitably a ship that is missing from the rules or the existing record for a particular vessel is inaccurate and requires amendment.


The biggest problem though is that the original Jutland rules had no provision for ships of light cruiser size or smaller. This is one of the reasons I am looking to go my own way.


The construction of a ship damage chart (hereafter referred to as SDC) looks at a number of factors some of which are straightforward, others less so. The main areas we are concerned with at this stage are armament, protection and speed.
Speed. This is very straightforward and as I am working on the basis that a 30 knot ship can move 12” the number are readily convertible. Essentially 2.5 knots of speed equal one inch of movement. Fractions should be rounded up if more than one knot over a 2.5 knot multiple e.g. an 24 knot ship would be treated as moving 25 knots (10”) whilst a 23 knot ship would be treated as 22.5 (9”) knots. I will cover ship movement in more detail in a further blog post.


Armament. For every gun a ship carries it has a box on the SDC. These should reflect their position on the ship itself so turrets will have their boxes together in twos or threes. Secondary and tertiary weapons should also be deployed in their correct positions on either beam. I should mention that I will be using a top down view for each SDC. Guns are of course rated using the method mentioned in my last post – BB, PB, CA, CL and DD. For the most part these categories are largely self-explanatory but as mentioned previously there is a degree of overlap. As a base the BB and PB category includes weapons of 9.4” and above, CA is larger than 6” up to 10”, CL is 4.1” to 6” whilst DD is 4” and smaller. I will detail the overlaps and their effects in a later post. Finally torpedoes. One box is marked on the SDC for every two carried.


Protection. This has given me more headaches than anything else with this project and try as I might I have not been able to see how the original numbers were calculated. I have a formula I am working with which may look a little inconsistent but bear in mind I am looking to model ship characteristics in such a way that one could readily have a good game featuring any permutation of ships types. The key assumption with this part of the process is that unless using torpedoes or barring something like a magazine explosion it was extremely difficult to sink a ship by gunfire alone. I will explain this in more detail in a further blog post. For the moment though it is sufficient to note that the protection, or more accurately, flotation factor is based on a combination of armour carried and tonnage.

Damage is another area that has given me much to think about and after much deliberation I shall be using the original Jutland model but with a number of additional factors. The original rules assumed that two ships exchanging gunfire would inflict damage above the waterline (the gunnery factor boxes) and when every box had been marked off the protection/flotation value would be reduced by one point per hit suffered. For every protection/flotation hit scored the movement factor of the ship was reduced by one. the ship was sunk when this factor was reduced to zero.

The key thing with is that until everything above the waterline had been destroyed the ship could still belt along with, in effect an undamaged hull and no speed restrictions. It also meant that ships with more gun factors would last longer as there were more hit boxes to cross off. Surely increasing the number and types of guns available (remember the base game made no allowance for secondary or tertiary weapons) would mean that certain ships would accrue an advantage simply because of having more weapon boxes to cross off?

This is certainly true as, for example, H.M.S. Warspite under the original system had 12 gun factors and 10 protection points. Under the new system it has 8 x BB rated gun factors and 12 x CL rated gun factors meaning 20 gunnery boxes instead of 12. The protection value changes from 10 to 14. So the new Warspite has a total of 34 damage boxes rather than the 22 of the original version. The problem becomes even more acute when you start looking at the Germans dreadnoughts that routinely carried secondary and tertiary weapons. I have a solution to this in respect of gunnery damage effects which will serve to negate some of this artificial survivability which I will outline in a further post.

I will have a mechanism in place for critical hits as this adds to the overall mayhem and also adds to the flavour. It also makes the after action reports more interesting to read!
Posted by David Crook at 08:44

The rules are probably further advanced than the blog posts would imply - so much so that I am planning on running a small play test this weekend. I will be using counters as I do not have the ship models yet and I will be using a lot of the original Jutland game material.

I am very excited about this and hope it lives up to expectations.

I would love to see a play-test battle AAR
:)

Looking forward to reading it!

I was aiming to get the play test in this weekend but a few domestic issues meant that I was unable to. I was however able to finalise a few points with the rules and also get the first batch of 12 models up to the 'waves, wakes, labels and ensigns' stage. These will be finished during the week with the next batch of 18 already undercoated.