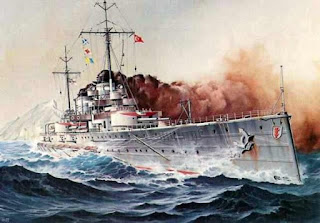 The playtest I am planning on running over the course of next weekend is fairly low key but is based on a potentially significant historical (in)action. The clue is in the title but a more fuller version of the quote from Winston Churchill I used runs as follows:

"....more slaughter, more misery, and more ruin than has ever before been borne within the compass of a ship."

The piece of the action I have chosen as the basis for my playtest takes place somewhere in the southern Adriatic and involves the Royal Navy armoured cruisers H.M.S. Defence, Black Prince, Warrior and Duke of Edinburgh with three destroyers against the German battlecruiser S.M.S. Goeben and the light cruiser Breslau.

I confess that my knowledge of this particular affair is rather hazy on the exact timeline and details (something I shall be taking steps to remedy) but for my immediate purposes the British are trying to engage the Germans in an effort to slow them up so that the battlecruisers of the Mediterranean fleet - H.M.S Inflexible, Indomitable and Indefatigable - could catch them and render them hors de combat. The problem for the British historically was that the commander of the armoured cruisers - Sir Ernest Charles Thomas Troubridge KCMG CB MVO - was under orders to "not to get seriously engaged with superior forces."

For the purposes of this scenario I have assumed that the British are more prepared to engage the Germans. As the Royal Navy ships are for the most part slower than the Germans (even allowing for the boiler woes of the Goeben) they will need to get in quickly if they are to have any chance of slowing them down. The three destroyers in support were all that were able to stay with the armoured cruisers at the speed they were travelling, mainly due to running out of coal. I am undecided about including them at all as they would have been hard pressed to have engaged the Germans in any event

For the purposes of the scenario I have assumed that the Germans are crossing he front of the British at an angle so the window of engagement will be  relatively brief.

A couple of points on the numbers above. The flotation values look quite close together in that the Goeben comes in at 12 whilst the average for the armoured cruisers is 9 and the Breslau comes in at 7. This is intentional and the actual calculation will be revealed later.  Suffice it to say that the rationale behind it is so that ships have some survivability (or rather to make the game last a little longer!) when facing their peers. The effect of damage from larger weapons on less well protected ships is reflected by the damage modifiers based on the calibre of the firing weapon and the type of target so although the numbers look close once the appropriate factors come into play the damage points should accrue fairly quickly!

The + or - modifiers next to the gun types are a reflection of their impact within the same notional gun type. Remember in a previous post that the 15" guns of the QE class had a +2 modifier compared to the standard 12" weapon? This is an extension of that same basic principle - the DD -1 guns represent the 47mm weapons carried which are not as effective as the 3.4" used as a baseline. Again all these assumptions will be obvious once the rules are drafted - and you can feel free to tweak them up or down to suit!

I shall be using counters for the ships in this action which are scaled at 1/4800th and so will be using centimetres rather than inches for all measuring. I will write up an after action report with some pictures if possible but the purple prose may be in short supply - it is a test after all!

Getting excited there seems to be an AAR in the offing ;)
Have some fun this weekend!

I certainly hope to do so! Seriously though, The first draft of the rules is virtually ready and merely needs some further editing/formatting. I have the counters to cut out but that will be the work of moments. I also have to draw up the ship damage record charts but again, that is pretty straightforward to do. I am excited about this and hope it works as well as I hope it does!