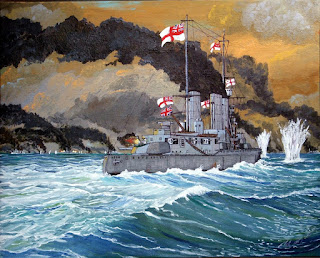 H.M.S. Lion about to enter the fray
﻿

In the original game of Jutland firing was handled very simply. Essentially you measured the range, added up the number of gunnery factors (gunnery boxes) firing, selected the appropriate column from the firing table and then rolled a single d6. The score rolled would determine the number of hits scored. This number could be modified according to range so the closer to the target you are the more damage you could potentially score. This is all straightforward stuff.

The rules I am working on will use this system but with an additional step. Hits scored are now referred to as potential hits as you will then be required to roll a further d6 per potential hit to see what, if any damage is inflicted. Damage inflicted will be variable and also subject to modification depending on the calibre of the weapon being used and the type of target - and this is a crucial difference to the Jutland system where all damage was 'flat'. In Jutland one hit scored one point regardless of the firing weapon or target type. The greater effect of heavier weapons in Jutland was represented by using additional gunnery factors. H.M.S. Warspite for example having 12 gunnery factors representing her 8 x 15" guns so heavier weapons had more factors which in turn meant more potential hits and therefore more damage. I prefer to have the damage inflicted on a variable basis* so that a larger weapon causes potentially more damage than a smaller one. As Jutland assumes a norm of 11 or 12" weapons for its capital ships I believe that larger or smaller weapons should have their potential damage adjusted up or down accordingly and not as a mean figure. With this in mind I am currently working on the following system.

After having secured a hit or hits the firing player then rolls a further d6 per hit. If the score is 1, 2 or 3 then no damage is scored. If a 4 or 5 is rolled then one point of damage is scored. A roll of a 6 is two points of damage. The damage inflicted may then be modified depending on the calibre of the weapon firing and the category of ship being fired upon.

A couple of examples of this are as follows. Our old friend H.M.S. Warspite has scored two hits on S.M.S. Seydlitz. The two hit dice come up 2 and 5. Warspite has hit Seydlitz with her 15" main guns which have a plus 2 modifier due to their size. There is no modifier for ship type as we are dealing with BB type weapons hitting BB type targets. The first roll of 2 is no effect - either the shell(s) hit and failed to explode or it caused no effective damage. The 5 though is a different matter as this is one point scored. However, due to the crunching impact of a 15" shell(s) the Seydlitz suffers a further 2 points of BB calibre damage or 3 damage points in total.

In another example S.M.S. Lutzow has fired her main guns at the RN armoured cruiser H.M.S. Warrior and has scored 3 potential hits. The dice are rolled and come up a 1, a 5 and a glorious 6. the 1 is discarded. As the Seydlitz is using BB rated guns against a CA target each hit receives a an additional 1 point of damage. This means that 1 point of damage is scored for the roll of 5 and 2 for the roll of 6. Each adds an additional point (BB weapons hitting a CA target) so the Warrior has suffered 5 BB calibre points of damage.

It is all very well scoring damage points but what do we do with them?

I mentioned previously that in Jutland damage points were first applied to the gunnery factors. When all of these had been marked off then any further hits could be applied to the protection/flotation value. The rationale behind this was that once the topside had been suitably battered that any further damage would have more chance of wrecking the vitals, loosening bulkheads etc. I have no great issues about how hits are applied when suffering damage and indeed believe that  variety is a good thing however, it does need to have a degree of control otherwise unscrupulous gamers will take advantage of the fact and apply any damage to the least important part of the ship. I also believe that gunnery could (and indeed did) cause damage below the waterline or in game terms against the protection/flotation factor. With this in mind the following applies. Within a single firing attack (that is the effects of firing from a single ship) consecutive damage points may not impact the same system. For example a target receives three hits. The first hit is applied to any part of the ship (lets say the main guns) and then second hit is applied. This may not follow the first (so not the main guns) but must be used elsewhere. The third hit could be used against the main guns again if desired. The area hit may also sustain additional damage depending on the calibre of the firing weapon and the calibre of the target damage. For example a BB rated gun has hit a BB rated target with two points of damage. The target ship wants to ensure his main guns are kept intact (at this stage of the action it is tactically prudent to do so) and so elects to apply the damage to his secondary (CL rated) guns. He may only apply 1 point  to the secondary guns (remember no damage points are applied consecutively) BUT as they are rated as CL (and this is two steps down from BB/PB the damage point adds an additional two to the point being applied. This means that a BB calibre gun hitting a CL calibre target or the CL part of a BB/PB/CA type ship will score three points. A table reflecting his will be drawn up and added into the text of the rules.

The rationale behind this is that quite often secondary and tertiary weapons were less well protected than the overall class of the ship would indicate. A large calibre shell exploding within a thinly armoured casemate could wreak havoc so the additional damage goes some way to representing this effect.

Finally, as far as possible damage has to be applied to the part of the ship that is nearest to the source of the fire. This means port, starboard, fore or aft.

I appreciate the above may seem a little confusing and at this stage is not complete but I hope that what I am trying to convey makes sense. Once the rules have been drafted in their entirety all will become a lot clearer!

With all this provocative thought a play-test must be in the offing!

I am close to a playtest but want to get the draft types out first. At the moment the rules exist in my head and across three notebooks and half a dozen post it notes....

I have a really good scenario in mind for the first playtest though.

Don't forget the 15" shells have a propensity for breaking up on impact and are not the super weapon they appear to be if you look only at range, shell weight etc.

I highly recommended Jutland : An analysis of the Fighting, for all the facts.

The Germans will always get slaughtered in a Run to the North game if the 15" shell's aren't limited in effect.

Looking forward to the rules and the playtest. This series of articles has re-whetted my long dormant appetite for WWI naval gaming.


One difficulty in assessing capital ship gun damage is that at longer ranges, shells have a lesser chance of hitting due to visibility, time/distance etc. but if they do hit, this plunging fire has a greater chance of landing on the much thinner deck armor causing additional damage.

Also the later vessels not only have larger caliber guns but their turrets have greater elevation and therefore more range and potential hitting power at these longer ranges.

I think I just made my head hurt!

It looked like great fun and I think you did a really good job in the set up. GQ are a good set of rules and I have fought some very entertaining games with them and I think they worked out well for Denmark Strait.

A good job well done for sure.

Cheers Dave I am glad you liked it :)

You are absolutely right about the 15” shell problem and this is why I am allowing for the chance for shells to do variable damage when they hit. I have the book you mention and it is a goldmine (albeit a little dry). When they did hit though the Germans had a very healthy respect for them. The ‘slaughtered Germans in the run to the north’ regularly happened under the Avalon Hill Jutland game so whilst the 15” are capable of great execution it is reigned in a little.

The play test is soon.

I trust you're using Conway as your reference for damage done to actual dreadnoughts ?

I have allowed for the effects of plunging fire in the rules for the very reasons you have mentioned. I am also delighted that your interest in naval warfare of the period has been reignited! All being well the play test will take place over the weekend and I will be sure to post the results to the blog.

I have access to Conways and am using a number of other titles as well - Campbells book for one as well as a number of other accounts. I should emphasis though that the game is not intended to be a detailed simulation of naval warfare in the period - rather it it a system that captures the essential flavour of the period in a straightforward fashion.

I only hope it works out as well as it is written!

Oh good ! Abstract is just fine, so long as you're abstracting the right stuff.

I certainly hope so!