My order from Spencer Smith Miniatures has arrived. The figures in this batch are all that I need to complete the ACW project based on the Kurz and Allison prints. For the most part the order is what would be called Confederate so pretty much everything is wearing a hat rather than a kepi. This part of the order is in fact now intended as a Christmas present so the package will be handed over to SWMBO to reappear, suitably attired in its festive apparel, on December 25th amidst the inevitable"Ooh, I wonder what this could be?" type comments.

If I am honest it has done me a favour as I want to tackle the whole thing in one fell swoop when I get to it. 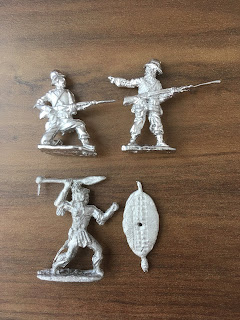 A little on the 'flashy' side but easy enough to clean up.

Previously I mentioned that Spencer Smith produce a range of 30mm Zulu war figures and I was very intrigued by this as I could not recall ever seeing these when Spencer Smith were in their heyday so to speak. From the pictures on the Spencer Smith website they looked a completely different style to the familiar ACW and 18th century ranges. I asked Peter Johnstone, the proprietor of Spencer Smith, about them and it appears the range came about as the result of a private commission. At this time I do not have any further details other than the chap that ordered them came from Wales and went by the name of Jones.

Anyway, here are three from the range. The Zulu looks suitably menacing and is not a bad casting at all, albeit very retro looking. the Zulu part of the range is quite modest in terms of choice so armies will be quite uniform in terms of pose. I have no problem with this but these days individual animation seems to be de rigueur so they may well offend the purist. 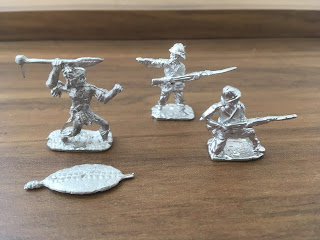 I rather like the NCO type in the background. Note the separate shield for the Zulu.

The British infantry look fine although the range seems to be full of dramatically lunging, thrusting, readying and parrying types - presumably defending something behind a pile of mealie bags or similar. Thankfully there are some more traditional marching and advancing types. It seems a little odd that there is greater variety of poses in the British list than there is for the Zulus - you have expected it to be the other way around.

I am not a fan of kneeling figures and in this case the example above seems nearly as tall as his standing compatriot. For me that is not an issue as I would not use them in any event.

These are not the best figures you will ever get for the Zulu War and the range is just about sufficient to raise a couple of forces. One could add to the British certain figures from the ACW Confederate types - these would make perfectly usable Boers so the First Boer War would be a feasible alternative or even Boers versus the Zulus because after all, "They are the enemy of my blood" as Ardendorff mentioned in the film Zulu.

As these are true 30mm they are smaller than most other types currently available as 28mm but I am thinking that they may fit with something like Warrior or similar if needs be. The biggest attraction with these figures, aside from the old school vibe they have, is that the foot figures are 60p a go.

All in all a pretty good range and certainly one I would be happy to use.
Posted by David Crook at 14:43

If I had a year to spare and a couple of hundred quid I would get some of these.

I rather like them and so from a Portable Wargame perspective there is plenty of potential for a couple of small forces.

You will not be surprised to hear that I have thought about this although the ACWs will be first.

I have had a little bit of a curve ball thrown into the mix though but that will be for a letr post.

The price is definitely right....

Lovely looking figures and a great price too. As Jim Duncan says, with the free time and funds...

They are never going to win any prizes in terms of detail but I really like them as they have a real old school charm about them.

They are a very good price for sure and my thinking is along the lines of Portable Wargame style forces.