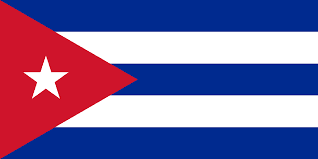 The national flag of Cuba

“From Little Acorns Do Mighty Oaks Grow” or so the saying goes. In this particular case it is very apt as it concerns the usual fate that befalls me when I fall victim to a single source of inspiration. In this particular instance it all started when SWMBO and I finally settled on our holiday location for next year. For a variety of reasons, too numerous to go into, we have booked two weeks in Cuba in June on an all-inclusive, adult only basis.

Cuba will be a first for us in that we have never flown long haul before as our usual holiday destinations tend to be in the Mediterranean with the occasional foray into the Atlantic to the Canary Island or even more daringly, Cape Verde. To be quite blunt about it the cost of going to Cuba for two weeks on an all-inclusive, adult only, 5 star basis was only a couple of hundred pounds dearer than going to the European part of the Mediterranean on a similar package. You can get some good deals but sadly in my experience the all-inclusive European option nowadays tends to be on the basis of the absolute bare minimum they can get away with so diluted drinks, limited choices of food and charges for whatever they can seem to be the order of the day. All inclusive for us is a huge convenience and whilst I must confess to missing the flexibility that a self-catering/bed and breakfast/half or full board basis can offer, the pros usually outweigh the cons.

We will be flying onto Holguin on the way to our resort which is roughly an hour from the airport (located on the coast where it says Holguin on the map, facing the Atlantic Ocean).

As part of my inevitable reading around the history of the island (and largely ignoring anything Castro/Bay of Pigs/Missile Crisis related) I have found myself looking at the Spanish American War of 1898 and the fighting in and around Cuba.

I have never considered the war of 1898 as a gaming choice and at this stage I am certainly not planning to do so but that would not stop me from reading about the conflict. The war was quite low level in terms of numbers but the outcome certainly established the US as a world power. At a more personal level I note that Kurz and Allison – of ACW fame - produced a series of prints on the war (8 in all as I recall)  which look suitably heroic and inspiring in an old toy soldier kind of way. 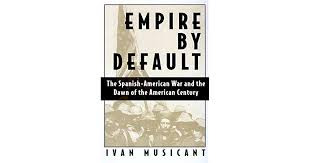 Picked up for a song and highly regarded.

I picked up the above book (which is a hefty 740 page doorstop of a volume) from Ebay for a mere £4. I have read Ivan Musicant’s book Divided Waters which is a great history of the American Civil War afloat and so when I found out, via a Facebook group I belong to, that he had written a title about the war my curiosity was piqued. I am after a couple of other titles – purely for completeness sake of course – on the war and who knows? One day I may game elements of it. The Osprey Campaign Title on San Juan Hill by the indefatigable Angus Konstam is supposed to be pretty good as well so I may well look that out and the new Men at Arms title which also covers the US in the Philippines.

The ships for the naval side are available from Tumbling Dice and Navwar (amongst others) and the land actions lend themselves to both the Portable Wargame and The Men Who Would be Kings. Figures are available from Old Glory amongst others and if I remember correctly there are a couple of Volley and Bayonet supplements covering the war.

Is this another project for DC to tackle at some point? To be honest I am not sure without having read about the war in more detail. Certainly the scale lends itself well to the style and size of action I prefer fighting but for now I have more than enough to be getting on with.

Of course those darned acorns have a nasty habit of growing into something much larger....

Cuba sounds like a terrific get-away! If you are staying on the eastern part of the island, perhaps a visit to Santiago and the battlefields around the harbor would be of interest? There are many good books on this low-level conflict including Teddy Roosevelt's heroic (he is the hero) Rough Riders memoir.

Oh, the Old Glory Spanish-American War are superb! I have painted many and they are a joy to paint.

I have seen many pictures of the Old Glory Spanish American range and they do look rather good. I have been making a mental list of potential visits whilst we are there and we are handily placed for Santiago, less so for Havana. We have plenty of time to think about though.

Meanwhile, back to the research!

Cuba is great, although it is a good few years since I was there last. Havana is a fabulous city, so it might be worth seeing if you can stay overnight (a day trip from the east of Cuba is a pretty long day, but quite doable).

I have American and Spanish armies ( Frei Korps 15mm) from a display game put on in Edinburgh more years ago than l care to remember. I use them with Bobs Portable Wargame rules and they give enjoyable games. The history of the war is well worth a read..
Alan

I hope this doesn’t sound awful but l am starting to collect some Turks to oppose my Syw Austrians and wondered if we might negotiate me buying some of your Turks surplus to you needs?
Alan

Havana is on the list of places to go to so we will see. There is quite a lot of bits and pieces around Santiago which is nearer to where we are staying. I will do some more research and see what we can potentially organise.

Very excited though, especially as it is my first ever long haul trip!

It is certainly something I shall read more about and as I suspected (and you have confirmed!) it is ideal Portable Wargame territory. I also think that for the Men Who Would Be Kings it would work well.

Drop me a line roguejedi@btinternet.com to discuss.

HI, David.
If you're thinking about Spanish-American War, look at 1898 Miniatures. Available trought Empress in UK, they' ve a wonderful range (spanish, cubans, filipino and US troops) in 28mm. Plenty of character, and woefully researched.
At its web you may find an (my humble) adaptation for TMWBK, in english and spanish.
Hope it help.
All the best.
Eduardo

Cuba is a fascinating place - guaranteed to stop you ever voting for even a remotely Socialist political party ever again. Basket Case doesn't even come close, but, of course, it's all the Americans' fault!

The figures look really nice but realistically I cannot see me gaming this anytime soon. I am not saying never and indeed, I am probably more likely to tackle the naval side first if I do game the period.

I keep getting The Men Who Would Be Kings in my mind and it is becoming an itch that may need scratching!

I am looking forward to the trip and am naturally planning to take in some historical sights, not to mention some of the areas of outstanding natural beauty.

I have long since lost all faith in politicians of whatever persuasion so will have to take your word on that!